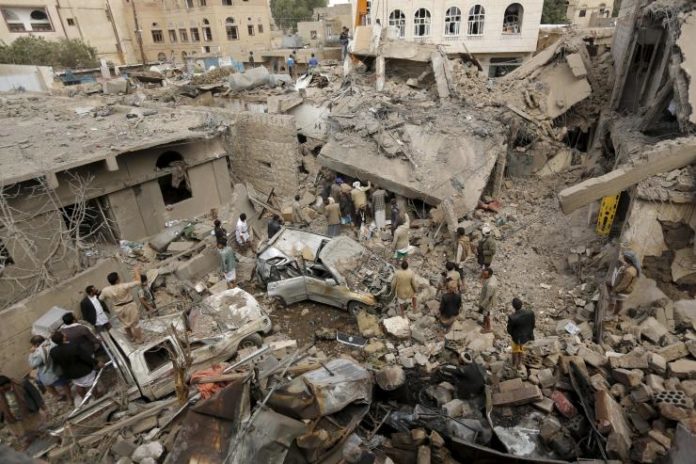 Furthermore, this doctrine has been explained in terms of several changes to the situation in the Middle East, including the expanding influence of Saudi rival Iran and the “disengagement of the West in Middle East conflicts.” Many Arab officials have reportedly been disappointed with the lack of American leadership at a time when the Obama administration was pursuing a policy of rapprochement with Iran.

This led, for instance, to the formation of a coalition of Arab states to fight back against Iran-backed rebels in Yemen, resulting in the re-capture of the capital of Sanaa from those rebels last month. By some accounts, the Obama administration urged the Saudis against carrying out its initial airstrikes. The administration’s apparent inability to convince the traditional US ally on this point may signal a reduction in the Saudis’ willingness to abide by US leadership, even as they strive to expand their military capabilities.

Viewed from a slightly different angle, the disagreement on the conflict in Yemen reflects the actual absence of US leadership in the region under the Obama administration. Indeed, the US president has been aggressively criticized on this point by his political opponents, who have repeatedly highlighted, among other things, his failure to take action against Syrian dictator Bashar al-Assad even after the Assad regime crossed US-imposed red lines.

An editorial in Hot Air now adds that Obama has “already yielded” to the expansion of Russian influence in Syria, as the US has not taken action in response to recent Russian airstrikes believed to be primarily targeting moderate rebel groups favored by the West. Hot Air argues that such inaction worsens a situation that began with a bad nuclear deal, which critics regard as a signal that the US generally will not stand in the way of the regional ambitions of Iran and its allies.

Naturally, many policymakers in the United States and in the West more generally are pushing back against the perceived lack of leadership and urging action to confront not only aggressive moves by other parties in the Middle East, but also such purportedly neglected issues as Iran’s human rights record. Advocacy on both of these issues was on display this week in the US Senate, the European Parliament, and the media, as hearings, letters and editorials addressed human rights in general and the US inaction on one particular human rights crisis in the Iranian dissident community of Camp Liberty, Iraq.

A meeting of the European Parliament group, Friends of a Free Iran on Thursday called attention to inaction by the member states on the human rights issue. The group signed a letter to European Parliament President Martin Schulz ahead of his visit to Iran, pointing out that human rights should be a top priority for the multinational body, even ahead of economic interests related to rapprochement with Iran.

The meeting also urged action to protect the residents of Camp Liberty against a continued medical blockade and reprisals directed by Tehran. But this topic was given center stage in a hearing of the US Senate’s Armed Services Committee on Wednesday. Indeed, the issue is largely a matter of American leadership insofar as the residents of Camp Liberty were under US protection prior to 2009, when the community was located at Camp Ashraf.

According to a report by the National Council of Resistance of Iran, several Senators and US military officers pointed out in the hearing that that protection was meant to be permanent, being backed up by documents still in the possession of the Camp Liberty residents. Advocates for those residents, members of the People’s Mojahedin Organization of Iran, thus consider the abandonment of Camp Ashraf to be an early example of ongoing, dangerous American inaction in the Middle East.

Those advocates represent a broad section of the American political spectrum and include recognized experts in military affairs, human rights, and foreign policy. Just prior to the hearing, editorials appeared in Townhall from two of these advocates: former US ambassador to the UN Human Rights Commission Ken Blackwell, and Colonel Leo McCloskey, who was a commander in charge of the protection of Camp Ashraf during the US occupation of Iraq.

Blackwell emphasized that “there is much that the US can do to protect these people in the short term and to secure the safety of their lives and their pro-democratic cause over the long term.” He went on to urge the US to restore its leadership role in the Middle East in order to evict Iran and its proxies from Iraq, partly as a means to safeguard the Iranian dissidents. Meanwhile, McCloskey emphasized the seriousness of the risk to these people if the US remains inactive, noting that 115 have been killed so far and over 1,000 have been wounded.