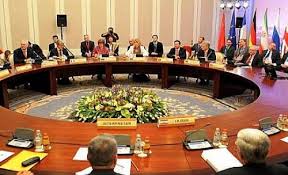 But the Los Angeles Times reports that officials struck a more doubtful tone on Tuesday than they had just two days earlier. Whereas the week began with reports that a framework agreement might be achievable by Friday, now it seems all but certain that if an agreement is finalized at all it will not be until the deadline for said framework.

What’s more, negotiators may even exploit the confusion that still exists about exactly when that deadline is. Early this month, the Jerusalem Post pointed out that different sources have given different dates, with the US Senate placing the deadline four months ahead of a previous November 24 deadline and the State Department placing it three months behind a June 30 deadline for a detailed, final agreement.

Thus, whereas some previous press reports indicated that the preliminary agreement would have to be concluded by March 24 at the latest, the relative lack of progress to date suggests that framework discussions will drag on for an additional week, possibly to the last day of March.

But the LA Times also points out that that same lack of progress has raised serious questions among officials regarding whether the deadline will be met at all. Reuters elaborated on some of these difficulties in a “Factbox” post on Tuesday. Although its list of crucial issues suggests that some of them have been resolved, it also indicates that Iran continues to insist upon the continuation of advanced research and development, continues to demand the immediate, wholesale removal of economic sanctions, and flatly refuses to so much as discuss the possible military dimensions of the Iranian nuclear program.

What’s more, a closer look at some of the issues that Reuters lists as resolved indicates that there may still be cause for these issues to be re-raised, either because of revelations of Iranian cheating or because of discomfort with the existing terms among members of the US Congress who are jostling for more of a voice in negotiations that have so far been solely executive-to-executive.

Illustrating the former point, it is worth noting that although the two negotiating parties claim to have reached a compromise on configuration of the Arak heavy water reactor that could provide a plutonium pathway to a nuclear weapon, some critics of the talks have argued that Iran violated its interim agreement with the P5+1 by purchasing advanced equipment for that facility – a move that Tehran defended by saying that it would only constitute a violation if that equipment was actually installed.

Naturally, Iran’s decision to obtain but not install banned equipment suggests that its long-term plans may contradict the agreement that is taking shape in the near term. This in turn points to broader criticisms of the regime coming from the US Congress, from Israel, and from media outlets such as The Tower, which reminded readers on Monday that Iran has had a tendency to renege on its agreements in the midst of past nuclear negotiations.

The Tower also notes that Tehran seems to have responded to the approaching deadline by “doubling down” on its demands for both uranium enrichment and its possible plutonium pathway. Indeed, some Western officials indicate that some of the fading hopes for a successful agreement may be related to the fact that new difference are emerging only now, even though Iran has now had 15 months in which to compromise on hardline positions that raised some doubts about the viability of negotiations at the very beginning of the process

Of course, some in the West respond to this situation by advocating for walking away from the talks or pressuring Iran to accept strict terms. But others, including the Obama administration as a whole, are evidently committed to salvaging a deal, and they have been criticized by their opponents for apparently attempting to do so by any means necessary.

The Associated Press on Tuesday pointed to some of the incentives for this approach, as well as the possible consequences of it, in an article emphasizing that the negotiations will have an impact far beyond the nuclear issue itself. As many others have pointed out before, the AP notes that some decision-makers in the US and Europe are certainly eager to gain access to Iranian oil and investment alternatives, and that this could provide a positive influx of capital, but could also enrich Tehran with resources that could be used for further nuclear work, foreign terrorism, and domestic repression.

Similarly, the Obama administration has been repeatedly accused of taking a deferent approach to dealing with Iran in order to not upset the chances of cooperation between the two countries against the Islamic State in Iraq. While such cooperation may weaken IS without the need for much US investment in the conflict, it would consequently have the effect of giving Iran a firmer foothold there – something that makes congressional Republicans and other opponents of the regime very nervous, as many of them believe Iran to be an equivalent threat to global security.

What’s more, some of those opponents have made no secret of their desire for regime change in Iran, something that the AP says would be made more difficult in the wake of a nuclear deal, which would “represent crucial recognition by the world of their Islamic theocracy.”

So while broader regional issues provide the Obama administration and its allies with greater incentive to follow through on negotiations that are currently in doubt, they also provide the administration’s opponents with greater incentive to work against the emerging deal. This has been rather obvious in recent weeks, and on Tuesday Reuters reported that US Senate Foreign Relations Committee chairman Bob Corker declared his intention to move ahead early next week with contentions legislation that would mandate congressional approval and verification of any deal that President Obama strikes with the Iranian regime.

Such a move would prepare the bill for a vote on the floor of the Senate in mid-April following a two week congressional recess. Despite Democratic opposition to what the president’s party regarded as hasty movement on the legislation, there is strong bi-partisan for action following the framework deadline, reflecting across-the-board skepticism both of Iran’s willingness to restrain its nuclear ambitions and about its foreign interference.

Conflict over the negotiations has appeared somewhat partisan since a speech to Congress by Israeli Prime Minister Benjamin Netanyahu on March 3 and especially since 47 Republican senators signed a letter to Iran indicating that they could invalidate a deal that they did not agree to. But that partisanship also appears to be fading as the agreement’s deadline nears, with representatives of both parties focusing on their shared general objections.

On Monday, an editorial by Marc Thiessen in the Washington Post argued that the letter controversy has been a distraction from much more substantive issues related to President Obama’s questionable policy with respect to Iran. His article echoed the arguments of some Republican defenders of the letter who say that something must be done to stop the administration from fulfilling its stated goal of making Iran an even more successful regional power than it already is.

Thiessen added that the administration’s emerging plan of working with the United Nations Security Council to remove sanctions while circumventing Congress would have the effect of giving away crucial US leverage for truly constraining Iran’s nuclear program. “Untold damage to our nation’s security will be done,” Thiessen wrote, “since once the international sanctions regime is dismantled, it will be impossible to reimpose.”

The Tower adds to this discussion, referencing experts who agree that the plan gives Obama cover to essentially lift congressional sanctions through back channels. Some of the same experts, former Justice Department lawyers David Rivken and Lee Casey, argue that this strategy is flawed largely because more than stripping away authority from Congress, it strips away authority from the US in general, making the nuclear agreement legally binding upon the US and making the US dependent upon the international community both for enforcing that agreement and for determining when Iran is in violation.

It is clear that Congress will not give up its authority over such international agreements without a fight, but it remains to be seen whether the Obama administration will follow through on giving up its own personal authority over the Iran nuclear issue.