Today, the prospects of a nuclear agreement between world powers and the Iranian regime remain bleak despite dozens of meetings. Iranian observers believe that Tehran is wasting time in its bid to either extract a further concession from its western interlocutors or produce a nuclear warhead because getting its hands on a bomb is critical to its long-term survival.

Currently, the regime is facing increasing protests at home. The regime’s Supreme Leader Ali Khamenei installed Ebrahim Raisi, notoriously known as the henchman of the 1988 massacre, as president back in June 2021  to thwart the eruption of further anti-regime protests. Khamenei and his cronies in various ministries, including the “Islamic Republic of Iran’s” Broadcasting organization (IRIB) and other media outlets, touted Raisi as the solution to the country’s incurable crises. Under Khamenei’s supervision, Raisi picked a cabinet comprised of commanders of the Islamic Revolutionary Guard Corps (IRGC), and mullahs loyal to Khamenei.

Since his inauguration, Raisi has made many false promises, hoping to ease the public hatred against the regime. Simultaneously, he has increased the cost of essential services to pay for the regime’s expenses on terrorism, warmongering, and support for Houthis in Yemen, the Hezbollah in Lebanon, and Shiite militias in Iraq.

For years, Raisi and his allies blamed his predecessor, Hassan Rouhani, and his Foreign Minister Javad Zarif, for failing to extract permanent concessions from the West and for signing a flawed deal with world powers. However, in the 10 months, since Raisi became president, his negotiators have achieved very little, frustrating loyalists to Khamenei and the IRGC.

Mocking Raisi and his hollow claims about resolving the JCPOA stalemate, the Jomhuri Eslami daily blamed Raisi’s government for failing to come to an agreement with the P4+1 and the U.S. On April 19, in an article entitled ‘JCPOA Fundamental Privileges Became Our Friends’ Maximum Demand’, the daily wrote, “The X newspaper writes, the Y social media platform promotes, and the Z official makes comments about the nuclear talks as if not only our negotiators have resolved the JCPOA stalemate and forced the U.S. to succumb to our demands, but also succeeded in setting in motion for [the U.S.] to eliminate [Israel] soon.” It added. “However, it appears that the developments are going in another direction.” 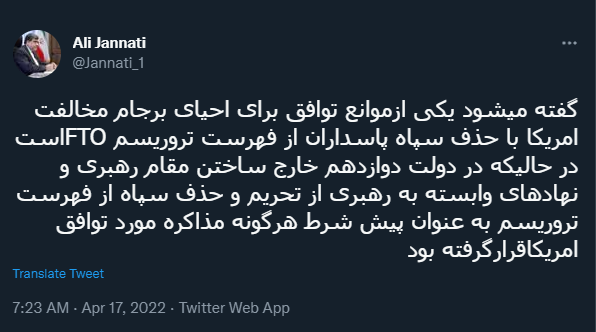 Expressing dissatisfaction over the regime’s weak posture in the talks, the daily added, “One of the obstacles to reviving the JCPOA is said to be the U.S. opposition to removing the IRGC from the Foreign Terrorist Organizations List (FTO) list, while the U.S. had agreed to lift the sanctions imposed on the Leader [Khamenei] and affiliated institutions, and remove the IRGC from the FTO list as a precondition for any negotiations with the Rouhani government.”

Citing a tweet from Ali Jannati, the former Minister of “Culture and Islamic Guidance” in the Rouhani’s administration, the daily also wrote, “The Great Satan had surrendered but we missed the opportunity.”

Indeed, the mullahs’ nuclear extortion, and the constant warnings about the IRGC’s terrorist nature inside the U.S. and across the globe, have led the American officials to reject the regime’s ambitious request for delisting the IRGC.

In a press conference last month, the U.S. Secretary of State Anthony Blinken said, “Concerning the IRGC, it is probably the most designated organization in one way and another in the world among organizations that we designated, including the foreign terrorist organization designation.”

#IRGCIsTerrorist
"With regard to the #IRGC, it is probably the most designated organization in one way and another in the world among organizations that we designated, including the foreign terrorist organization designation," said @SecBlinken in response to @BarakRavid. pic.twitter.com/lsY6iGUox1

On April 20, the AFP reported that Biden was reluctant to remove Iran’s Revolutionary Guards from the terror list. said it wrote, “U.S. President Joe Biden seems increasingly determined to keep the ‘terrorist’ designation on Iran’s Revolutionary Guards, which Tehran is demanding be removed before it returns to a deal on curbing its nuclear program.”

In these circumstances, the Iranian regime has seemingly lost its enthusiasm over JCPOA concessions. It has tried to blackmail the international community, threatening global peace and security in a bid for it to be recognized as a nuclear power. As a result, Tehran has been attempting to drag the talks while it enriches and stockpiles more uranium close to weapons-grade purity.

It is time for the international community to adopt a firm approach toward the regime in Iran, rather than continuing the fruitless talks in Vienna.

The year is 2026. Iran's breakout time is 14 seconds and negotiators huddle in Vienna for the 47th round of talks. An EU official expresses cautious optimism while an unnamed US source warns that the window for a deal is rapidly approaching the point where it may someday close.