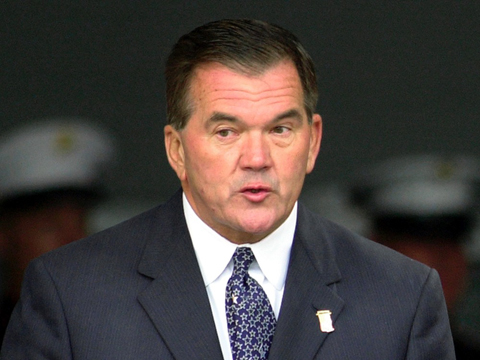 The fact that Tehran dared to nominate him speaks volumes about how it views American policy: weak and indecisive. It also shows that Iranian President Hassan Rouhani is neither serious about the trust that has been offered to him by Western powers, nor deserving of it.

Tehran’s belligerent foreign policy has always been a corollary of its antidemocratic nature. The regime has defined itself through the brutal suppression of opposition forces. And Abutalebi has been present through all of it.

By picking Abutalebi, Rouhani was showcasing the direct and deliberate connection between the regime’s core principles of repression and terrorism and his own faction’s policy objectives.

Abutalebi is a man accused by Italy’s courts and police of involvement in the 1993 assassination of Mohammad Hossein Naghdi, a former Iranian diplomat who defected and joined the opposition National Council of Resistance of Iran. Naghdi was assassinated in Rome in 1993. At the time, the New York Times reported that the assassination “was the latest in a series of killings of opponents of the Tehran government.”

As recently as 2008, an Italian court uncovered evidence that Naghdi’s killing was ordered by the Iranian regime and that the persons tasked with that assassination were directly answerable to Abutalebi in his capacity as the Iranian ambassador to Rome.

The very beginnings of Abutalebi’s “diplomatic” career were marked by direct involvement with the most radical elements of the regime. He then went on to hold positions in a government that indisputably dealt in terror and political assassination as it consolidated its hold on power.

Even if his involvement in the Iranian hostage crisis was the only mark against Abutalebi, it would be enough to qualify his appointment as – in the words of Texas Sen. Ted Cruz – “a deliberate and unambiguous insult to the United States.” The possibility that he has the blood of dissidents on his hands only makes that insult all the more stark.

Make no mistake: That insult is being delivered straight from the desk of the Iranian president, a man whose election was touted in Western media as a victory for moderation within the historically repressive, theocratic regime, which calls into question the U.S. government’s assumption that it is now paired with an earnest partner in negotiations.

There are reports that representatives of the Obama administration “said the subject did not intrude on the last round of [nuclear] negotiations, held in Vienna, and they predicted that it would not affect the chances of an agreement, since the Iranian government had other motivations to conclude a deal.”

What shockingly unintentional honesty! It’s hard to tell whether this sentiment is based on a realistic understanding of those “other motivations,” or whether it expresses a fantasy.

Of course Iran has other motivations. But in light of the close connection between the mainstream of the current regime and the radical elements that founded it, it seems clear that those other motivations are not to change the status quo, but to uphold it.

This important but brief diplomatic controversy should not distract the administration and policymakers from the deplorable and unacceptable actions of the Iranian government. The mullahs and Rouhani continue to support Syria’s Bashar al-Assad; execute dissidents and ordinary citizens (more than 700 during the brief tenure of Rouhani); sustain their stifling repression of political opposition (evidenced in the brutal raid on political prisoners at the notorious Evin prison in Tehran late last month); reject the sustained presence of international journalists; attack opposition groups beyond their borders; and proclaim publicly their nuclear ambitions.

There is one simple fundamental question that the administration and policymakers must answer:

What is the basis for the United States to trust this regime to abandon its pursuit of nuclear weapons?