The crash occurred just before midnight on July 10, in the city of Sanandaj, roughly 400 kilometres west of Tehran, according to the Regime’s television news channel.

The Democratic Party of Iranian Kurdistan, which resides in Paris due to the dangers of operating in Iran, posted videos of the accident’s aftermath to its Twitter account, and reported that between 20 and 30 people had died in the accident.

The casualty figures have not yet been independently confirmed, but the Regime is reporting 11 deaths. It is not unusual for there to be a discrepancy as the Regime often underreport statistics that make them look bad, like prisoners on death row and protesters tortured to death. 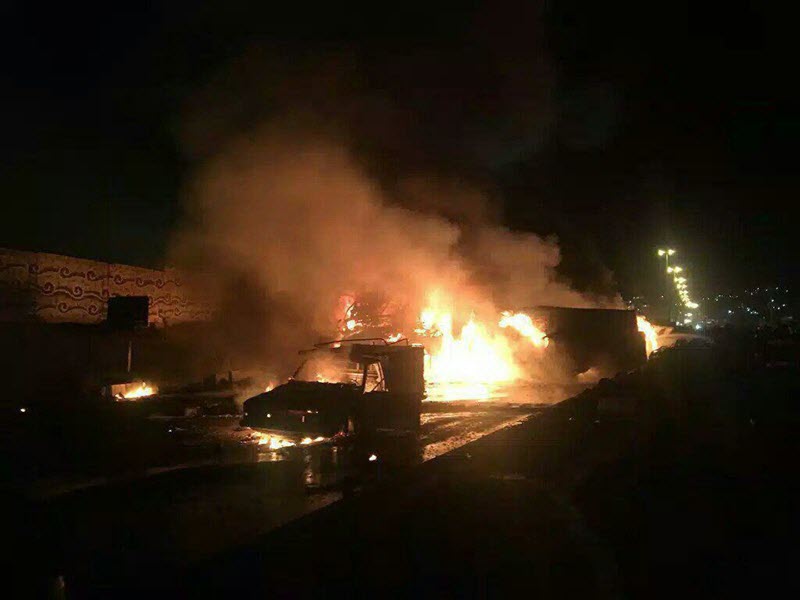 The authorities said that the tanker’s brakes failed, which is why it smashed into the bus near a bus terminal, causing both vehicles to burst into flames.
Iran’s traffic fatality problems

However, this is far from the first road traffic accident in Iran. According to UNICEF, Iran’s rate of traffic accidents is 20 times the world’s average, while the World Health Organisation reports that Iran has the highest deaths from road accidents in the world.

Let’s look at some quick stats on Iran’s road traffic:

• 28,000 people are killed every year in road traffic accidents
• Traffic accidents are the leading cause of accidental death for children under 5
• Every 19 minutes someone dies on a road in Iran
• 300,000 people are disabled in these accidents
• Every two minutes someone is disabled in a crash
• These traffic fatalities cost Iran 6 billion US dollars every year (roughly 5% of Iran’s GDP)

Why does Iran have such a horrific problem with road accidents?

The Regime has squandered the Iranian people’s money on warfare and support for terrorism, when they should be putting more money into protecting the people from traffic accidents, for example:

• fixing the problems of the roads (i.e. potholes)
• increasing enforcement of traffic laws (i.e. speeding, wearing seatbelts)
• making sure drivers have adequate training before they take to the roads
• ensuring the vehicles produced and sold in Iran meet global safety standards (i.e. airbags)

However, the problem is that the Regime is unwilling to deal with this problem, as they are any problem in Iran, which is why they should be removed from power by the people.