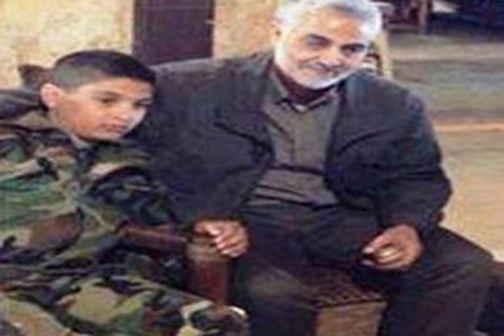 The report published a photo of Ghassem Soleimani meeting with family of Hilal al-Assad, the Syrian dictator’s cousin, who was killed in the port city of Latakia, fighting opposition forces.

The criminal forces fighting for Bashar al-Assad have been organized under supervision of Ghassem Suleimani and its terrorist Qods Force.

In a rare acknowledgement by a senior commander of the Revolutionary Guards Corps (IRGC) on the Iranian regime’s military intervention in Syria, Major General Hossein Hamedani, said on May 4: “Today, 130,000 trained Basij forces are waiting to enter Syria. Today we fight in Syria for interests such as the Islamic Revolution. Our defense in Syria is to the extent of the Sacred Defense (term used by the regime officials to refer to the Iran-Iraq war of 1980’s).”