Who is Mohammad Hejazi?

Mohammed Hejazi started suppressing opponents in the Iranian provinces of Kurdistan and West Azerbaijan after the Velayat-e Faqih (mullahs’ regime) came to power in Iran and sought to suppress its political opponents.

He also served in Khomeini’s war machine during the Iran-Iraq War and played an important role in the deployment of troops, including students to the southern front of the war, many of whom served as “cannon fodder” to clean up the minefields on the Iraqi side in Khomeini’s military operations.

Hejazi like other “blood thirty” persons of the regime is believed to hold a fake Ph.D. in National Defense from the Department of Strategic Management and is a member of the faculty called Imam Hussein University.

Other important positions that Hejazi has held include:

Mohammad Hejazi’s Interference in the Elections of 2005

The Basij, led by Mohammad Hejazi, played an effective role in propaganda for Mahmoud Ahmadinejad in the 2009 Presidential election.

One month after the election, at the commemoration ceremony of the commander of the Basij in Tehran, he said, “Today, the gap between the government and the people has diminished, and this gives us hope that we will be able to thwart enemy conspiracies.”

The role of Mohammad Hejazi in suppressing the 2009 demonstrations

Mohammed Ali Jafari, the commander of the Revolutionary Guards Corps in July 2009, nominated Mohammad Hejazi while keeping the position of the “Commander in Chief of the IRGC” as the successor of the Sar-Allah IRGC base.

According to the regime’s introductions, the area of ​​activity of the Sar-Allah IRGC base involved keeping the security in large Tehran. This base had played a key role in suppressing the post-election protests and events in 2009.

Following a bloody crackdown on the protests in 2009, an announcement was issued with the “very secret” stamp and it was announced that it had been sent from the Sar-Allah base to the Ministry of Health and Medical Education.

The letter ordered hospitals not to hand over medical records of injured and killed people in the protests to their families. 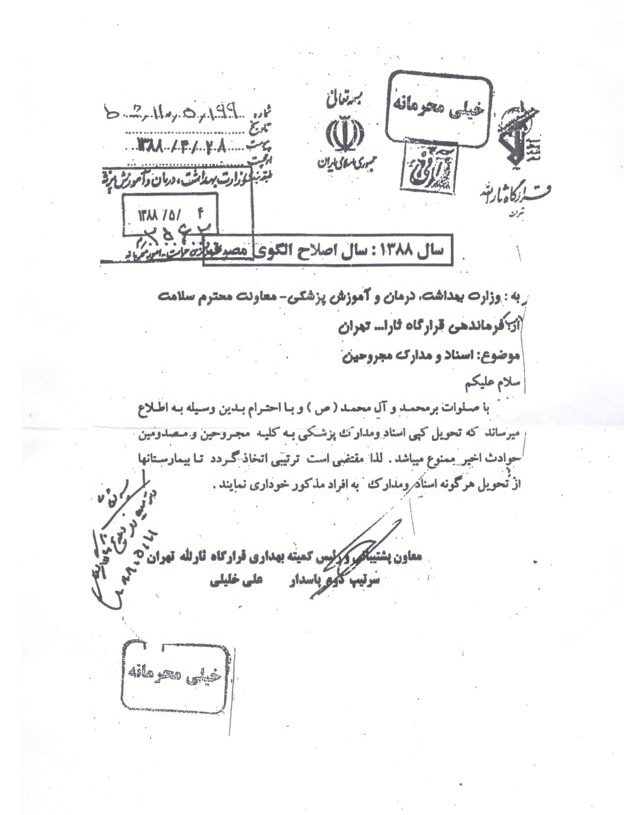 Under the embargo, all of Hejazi’s assets in Europe will be confiscated. A statement from the European Union pointed out that Mohammad Hejazi was the head of the Tehran-based Sar-Allah group and the former head of the Basij.

US sanctions against Mohammad Hejazi

Earlier, on 25 October 2007, the US Treasury Department, under the executive order 13382, sanctioned Mohammad Hejazi, for serving as a former commander of the mobilization forces along with four other IRGC commanders and two main entities of the IRGC and the Ministry of Defense and the support of the armed forces.

The sanctions also included nine entities affiliated with the IRGC, as well as Meli and Mellat banks and three individuals from the Aerospace Industries Organization.

Also, on 31 October 2017, the US Treasury Department imposed new sanctions on 12 individuals and 29 entities of the regime, one day after the CAATSA law came into force. The name of Mohammad Hejazi was also mentioned in these sanctions.

Hassan Ra’yat: Profile of a Mafia Leader in Iran