The comments from these and other Iranian figures are indicative of a still-expanding war of words between the Shiite theocracy and its traditional adversaries, as well as arguably showcasing the anxiety that the Iranian regime is contending with as it faces crises both inside and outside its borders.

UPI quoted the IRGC Brigadier General Hossein Salami as reiterating unsubstantiated claims by Iranian officials regarding American and Saudi backing for the Arab separatist group that claimed responsibility for last week’s attack, which killed at least 25 people including a dozen Revolutionary Guards.

The incident has been described as a blow to the image of the hardline paramilitary, whose public statements tend to characterize it as being invincible. But it has also been suggested that the IRGC could exploit the deaths to silence dissent while promoting policies and viewpoints that are favorable to its interests, including policies that demonstrate brinksmanship in dealing with foreign “enemies”.

This latter possibility was certainly on highlighted at the Friday prayer meeting in the capital city of Tehran, where Salami addressed the US, Saudi Arabia, and Israel to say, “You are sitting in your glass palaces, and you can’t withstand the blade of the Iranian nation’s revenge. Our self-restraint is deeply rooted in our revolutionary nobility, but if you cross our red lines, we will surely cross yours.”

Salami had previously referenced “revenge” in remarks at a funeral for victims of the terror attack in the city of Ahvaz. At that same ceremony, military and political officials led members of the assembled crowd in chanting “death to America” and “death to Israel,” leaving no doubt about their intention to politicize the event.

Salami also said that the perpetrators of the attack had been backed by a “triangle” of enemies – invoking language that had previously been used by Supreme Leader Ali Khamenei to explain large-scale peaceful protests that challenged the government and called for regime change at the beginning of the year.

In January, Khamenei credited the leading Iranian opposition movement, the People’s Mojahedin Organization of Iran, with dedicating months of advance planning to the nationwide uprising that began in late December and continued for several weeks. But Khamenei also dismissed the domestic Resistance, again without evidence, as being comprised of foot soldiers for the US, Iran’s Arab neighbors, and the Jewish state.

In fact, representatives of the Resistance movement have variously criticized the US and its European allies for inadequate support, while steadfastly insisting that the PMOI-driven project of regime change must be a reflection of the will and the efforts of the Iranian people, not any foreign power.

Nevertheless, it is true that the actions of that Resistance, both in the nationwide uprising and in subsequent anti-government protests, have been accompanied by rising levels of alignment among Iran’s traditional adversaries, with the explicit intention of putting more pressure on Tehran from the outside.

This trend was clearly on display this week as, according to the Associated Press, the White House pressed ahead with plans to develop a formal anti-Iran alliance that many have described as an “Arab NATO”. Foreign ministers from the prospective members of the Middle East Strategic Alliance met with US Secretary of State Mike Pompeo on Friday, against the backdrop of the United Nations General Assembly in New York.

There, the discussed a range of mutual foreign policy interests, including “stopping Iran’s malign activity in the region”.
A press release by the State Department declared, “All participants agreed on the need to confront threats from Iran directed at the region and the United States.” Broadly speaking, “the region” includes the state of Israel, though it is not clear whether Israeli security issues arose in the given meeting.

Certainly, Israeli representatives did not participate and the Jewish state is not a prospective member of the alliance, but this is not to say that the government of Israel hasn’t contributed to the multilateral pressure that has been exerted on Iran in recent months, prompting its officials to lash out against their “triangle of enemies”.

In fact, the Washington Examiner noted on Thursday that Israeli Prime Minister Benjamin Netanyahu had highlighted improved relations between his country and some of its Arab neighbors in his address that day to the UN General Assembly.

Netanyahu described this as an “unintended consequence” of the 2015 nuclear deal between Iran and six world powers, which was met with much skepticism and anxiety by Iran’s strongest opponents and subsequently prompted the beginning of an ongoing trend toward greater international alignment against Iranian threats.

The Examiner report also called attention to remarks that had been offered in May by Bahraini Foreign Minister Khalid bin Ahmed al-Khalifa to explain this situation. “As long as Iran continues the current status quo of its forces and rockets operating in the region, any country — including Israel — has the right to defend itself by eliminating the source of danger,” he wrote on Twitter.

Of course, the Islamic Republic does intend to maintain this status quo, as was made clear by the speakers at the Friday prayer gathering in Tehran. The event’s leader, Ayatollah Mohammadali Movahedi Kermani, specifically called attention to the Iranian missile program, warning that “if America makes the slightest mistake, their bases around Iran will not remain secure.”

In reporting upon his remarks, The Hill suggested that Kermani was responding in particular to a report that had been released by the State Department on Tuesday, which described the persistent Iranian missile threat.

The report described “a stockpile of hundreds of missiles that threaten [Iran’s] neighbors in the region,” and The Hill notes that its findings were reflected in President Trump’s speech to the UN General Assembly on Tuesday. “We cannot allow the world’s leading sponsor of terrorism to possess the planet’s most dangerous weapons,” he declared.

That speech was only part of a much larger effort by the Trump administration to generate broad international consensus regarding the need to address the threat of Iran’s malign behavior.

On Friday, a representative of the State Department urged the UN’s International Atomic Energy Agency to reexamine the issue of Iran’s compliance with the 2015 nuclear agreement, following upon allegations from Netanyahu that the Iranian regime was maintaining a “secret atomic warehouse”.

“[It is] absolutely imperative that the IAEA fully exercise its authorities in order to provide confidence to the international community that there are no undeclared nuclear materials or activities in Iran,” the American official said, according to Reuters.

But it is doubtful that much action on this issue will be forthcoming either from the IAEA or from the five signatories who remain a party to the Joint Comprehensive Plan of Action following the American withdrawal in May.

Nevertheless, the belligerent remarks pouring out of Tehran may give pause to European governments that have so far defied the American efforts to re-impose sanctions on the Islamic Republic and to otherwise step up pressure with the intention of forcing a comprehensive change in its government’s behavior.

While that belligerence has primarily focused on the US itself, along with the Gulf Arab states and Israel, this is not to say that Europe is immune. In fact, it was revealed in July that European authorities had disrupted a terror plot emanating from the highest levels of the Iranian regime, which would have targeted a rally of the National Council of Resistance of Iran, held outside of Paris on June 30.

An article published in IranWire last week warned that history shows how the Islamic Republic tends to respond with violence whenever it comes under a perceived threat, whether that threat is internal, external, or even “of its own making” as in the case of the country’s worsening economic crisis.

With oil-related US sanctions scheduled to return to Iran on November 4, that crisis is expected to become still worse and to bringing with it further anti-government protests by the country’s organized, pro-democracy activist community.

Insofar as the regime’s response may involve further expansions of anti-Western rhetoric or even additional attempts to attack global affiliates of the Iranian Resistance, it may pose a serious challenge to European policymakers who have so far sought to provide Tehran with guarantees and incentives in order to preserve the nuclear deal.

In the meantime, though, it is clear that existing anti-Iranian alliances are growing stronger in the face of the regime’s existing rhetoric, and may even be formalized to some extent following discussions at the General Assembly.

These alliances presumably add to the leverage that the US wields in its international outreach, which is already considerable. NPR and Hellenic Shipping News each discussed this in reports on Thursday and Friday, respectively.

The latter highlighted the Trump administration’s commitment to exerting pressure on foreign markets, which includes not only direct outreach but also efforts to deprive would-be customers for Iranian oil of their access to ship, insurance, and so on. It also noted that it remains unclear whether the administration will offer sanctions waivers to any partner countries, as its predecessor did.

While the NPR report quoted one expert as saying it is unlikely that Chinese companies will reduce Iranian oil purchases on account of the US, Reuters reported on Friday that one such company, Sinopec Corp, had done just that, following suit with numerous European companies and reducing Iranian oil sales to China by perhaps 20 percent over last year. 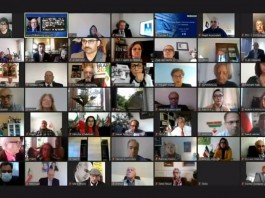 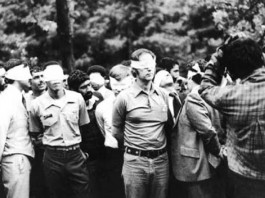 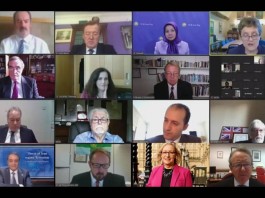