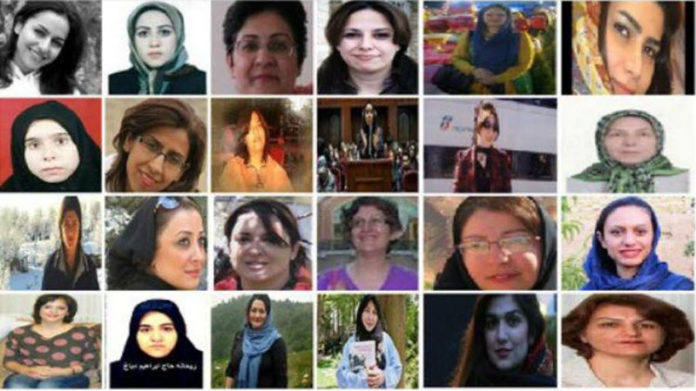 The protest movement has arguably been inflamed in large part by the statement issued in March by Maryam Rajavi, the leader of the People’s Mojahedin Organization of Iran and its parent coalition the National Council of Resistance of Iran, calling for “a year full of uprisings.” But at the same time, mass protests represent only one portion of the defiance and civil disobedience that currently defines Iran’s domestic situation. Some other aspects of that situation involve persons who are in no position to participate in mass demonstrations, including those who have already been imprisoned on political grounds.

As an example, Iran Human Rights Monitor pointed on Wednesday to the case of two Sufi women, who have refused to appear in court on two separate occasions as they protests against the lack of due process in their cases, as well as the general persecution of the Sufi religious minority. On each occasion, the two women have publicly highlighted their lack of access to lawyers, among other legal irregularities, to explain their refusal. What’s more, this comes after both women previously participated in a hunger strike aimed at calling attention to torture and other harsh treatment by prison guards.

The IHRM report also identified two other detained Sufis, Mohammad Karimaei, and Sekhavat Salimi, as having refused to appear in court on at least one occasion after comparing the judiciary’s line of questioning to a medieval inquisition.

The detention of each of these individuals reportedly stems from their participation in Sufi protests in February which stemmed from threats to the community’s leaders and turned into clashes between protesters and security forces. Coming, as it did, only weeks after the nationwide anti-government protests, this incident was connected in the minds of many observers to the overarching patterns of unrest. The fear of crackdowns on the Sufi leadership was evidently exacerbated by numerous reports of indiscriminate arrests and interrogations of political and social activists in the wake of the nationwide protest.

Among those targeted in this large-scale crackdown were various environmental activists including Kavous Seyed-Emami, an Iranian-Canadian professor who made international headlines after regime authorities dubiously declared that he had committed suicide while in detention. The widespread attention to the case apparently helped to spur more criticism of the regime both at home and abroad. And this effect persists to the present day, as the CHRI reported on Thursday.

That report indicates that Ramin and Mehran Seyed-Emami, the deceased man’s two adult sons who presently live in Canada, have filed a lawsuit against the state media outlet Islamic Republic of Iran Broadcasting for committing libel against their father by airing confessions that were extracted under torture and by presenting unsubstantiated allegations as fact in televised “documentaries.”

On one hand, such foreign-based efforts to hold Tehran accountable for its actions carry relatively few risks compared with the risks of death, torture, and imprisonment facing those who continue to participate in protests or to defy the regime from within its prison system. But the Seyed-Emami case certainly does carry attendant risks for the plaintiffs’ Iranian attorney and for their mother, who was arbitrarily barred from leaving the Islamic Republic along with them after the announcement of Kavous Seyed-Emami’s death.

Last month, Iranian authorities arrested the renowned human rights lawyer Nasrin Sotoudeh and charged her with national security crimes for defending women’s rights protesters and criticizing the judiciary’s practice of limiting defendants’ choice of representation to a small list of state-approved attorneys. This is only one of many examples of the regime targeting lawyers on the basis of their clients’ political “crimes.” Meanwhile, there are also numerous examples of the regime putting pressure on the family members of accused individuals, either to extort confessions or to silence criticism.

It remains to be seen what effect such tactics may have on the suit filed by the Seyed-Emami brothers, but it has been reported that their mother Maryam Mombeini was already arrested in June and interrogated for hours without the presence of a lawyer, leading to her being hospitalized due to the effects of stress. But even if this affects the given legal proceedings, it would likely contribute to the further growth of international criticism in general.

Naturally, this criticism reaches far beyond the Seyed-Emami case and involves many individuals and organizations who have few direct connections to Iran and thus are not subject to the sorts of pressure tactics described above. For example, IRHM reported on Wednesday that the World Medical Association had written a letter calling renewed attention to the phenomenon of Iranian executions of individuals who were under the age of 18 at the time of their alleged crimes.

Specifically, the WMA letter came in response to the execution last month of Abolfazl Chezani Sharahi, who had been sentenced to death when he was only 14 after Iranian medical examiners declared him mentally “mature”. The letter emphasized that such activities by medical professionals are violations of both international law and basic professional ethics. The UN Convention on the Rights of the Child categorically bans all juvenile executions, but Iran routinely rejects this as cultural imposition, stoking recurrent and widespread international condemnation.
Meanwhile, various Iranian voices are urging the international community to build upon such condemnations, to expand them to include a wider range of human rights issues, and to back up those condemnations with substantive actions, such as economic sanctions. An editorial at IranWire did just this earlier in July when it urged the United States to add Iranian Justice Minister Alireza Avaei and the Ministry of Justice itself to the list of individuals and institutions under sanctions for human rights violations. The article points to Avaei’s major role in the mass execution of political prisoners in 1988 and to the Ministry’s demonstrated track record for paying lip service to human rights while simultaneously enabling the worst of the regime’s abuses.
The IranWire piece specifically puts this recommendation in context with the ongoing protest movement, suggesting that it would “boost the morale of demonstrators, thereby encouraging them to continue their campaign for justice.” The article goes on to say that sanctioning the Justice Ministry would also go a long way toward undermining the false perception that the administration of current Iranian President Hassan Rouhani is somehow more moderate or more cognizant of human rights than its predecessors.

Various human rights organizations have observed that certain human rights indicators have actually grown worse since Rouhani’s election to his first presidential term in 2013. The recent months’ anti-government protests recognized much the same phenomenon and thus rejected the notion of significant political differences between Rouhani’s reformist faction and its hardline competitors. Recurring slogans of the protest movement reportedly include the chant, “Reformists, hardliners: the game is over.”