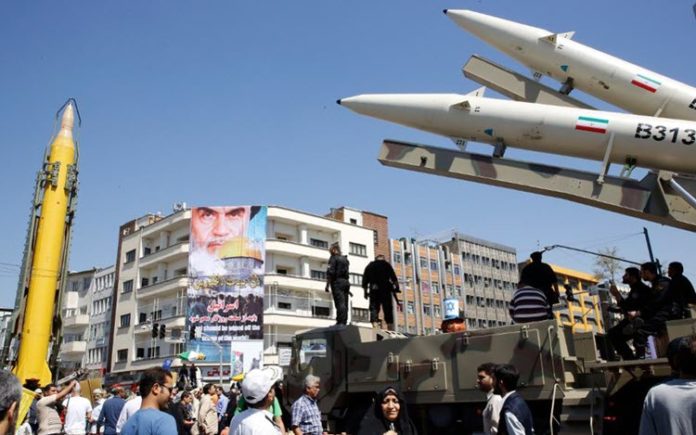 In January, US President Donald Trump renewed the sanctions waivers put in place by the 2015 agreement, which he has repeatedly decried as an “embarrassment” and “the worst deal ever negotiated.” This announcement was billed as a last opportunity for the US Congress and European partners to commit to a plan for either renegotiating the Joint Comprehensive Plan of Action or creating supplementary agreements that would make restrictions on the Iranian nuclear program permanent while also addressing the nation’s ballistic missile activities and regional interference.

Trump has promised that if these efforts are not successful, he will not renew the waivers at the time of the next deadline, in May. But recent reports have indicated that some of the key players in those efforts are still uncertain of what actions would be necessary to placate the US president. The State Department has offered a solution in which the European signatories to the JCPOA simply make a formal commitment to subsequent action in order to secure a new sanctions waiver, but those governments appear wary of committing to something without knowing exactly what that action would entail.

The Washington Post observed that European officials have reacted in varying ways to the repeated threats to the JCPOA coming out of the White House. On one hand, those figures have made efforts to find common cause with Mr. Trump, reiterating concerns over Iranian missile development and activities in the broader Middle East. French President Emmanuel Macron has arguably led the way on this strategy, hosting Trump in Paris while putting off previously planned visits to Tehran in hopes of first resolving the nuclear issue.

But on the other hand, Europeans have also been openly critical of the White House and of a strategy that appeared to marginalize diplomacy. Along these lines, the Post quoted German Foreign Minister Sigmar Gabriel as saying, “We no longer recognize our America.” And the tone of such commentary highlights concerns over the possibility that Trump will remain committed to tearing up the JCPOA even if Congress and the Europeans come to an agreement of their own.

This in turn threatens to hand Europe disincentives for actually pursuing an agreement that will be satisfying to Trump. And even some conservative commentators and serious critics of the nuclear agreement have pointed to this issue in hopes of urging the White House to adopt a more farsighted Iran policy. This was the focus, for instance, of an editorial by Jennifer Rubin, also in the Washington Post, which cited two other conservative critics of the JCPOA in order to make the argument that Trump is alienating European allies and thus harming long-term prospects for resolving the nuclear issue.

Rubin’s conclusion, and that of retired General Charles Wald and former Ambassador Eric S. Edelman, is that the US should preserve the nuclear agreement for the time being, then focus on building international consensus and exerting multilateral pressure on Iran for the negotiation of a new and more comprehensive agreement.
That advice is arguably strengthened by the quarterly reports from the International Atomic Energy Agency which describe Iran as remaining in compliance with JCPOA. Although this assessment has been disputed by those who believe either that the IAEA’s monitoring is too lax or that Iran is being given a free pass for minor violations, the fact remains that the reports make it difficult for the US to undermine the agreement without taking the blame for its ultimate collapse.

But this is not to say that the IAEA reports provide nothing that could be helpful to an assertive, long-term American strategy on this issue. In fact, The Algemeiner reported on Friday that the latest quarterly report reiterated the agency’s defense of Iranian compliance but also highlighted at least one Iranian position that could be indicative of a significant potential threat that will need to be addressed by the international community at some point in the future.

That report notes that Tehran informed the IAEA of a decision to “construct naval nuclear propulsion in future.” The Algemeiner adds that this idea was originally floated by Iranian President Hassan Rouhani, specifically as a threat to the US in response to the possibility of Trump undermining or withdrawing from the nuclear agreement. But despite that rhetorical origin, the subsequent language suggests that Tehran is now committed to such nuclear development regardless of the future of the JCPOA.

Although that level of developed is estimated to still be a number of years away for Iran, The Algemeiner observes that “mentioning it evokes both projecting military might and potentially enriching uranium beyond the limit of 3.67 percent purity imposed by the deal.” Of course, “mentioning it” does not constitute a material violation of such restrictions, but it could easily encourage European policymakers and other defenders of the JCPOA to more closely scrutinize subsequent Iranian actions, and to be ready for multilateral action at some point in the future.

Presently, Washington and Tehran are both trading threats to the survival of the nuclear agreement, and the presumed intention on both sides is largely to push Europe in one direction or another. Whereas the Trump administration’s threats are reportedly keeping various European entities from following through with Iranian investments, the threats from Iranian officials are often specifically framed as ultimatums for that same follow-through.

On Thursday, Reuters reported that Iran’s Deputy Foreign Minister Abbas Araqchi had once again reiterated this point, saying the country may withdraw from the JCPOA if it sees insufficient economic benefit and if banks continue to withhold financing for foreign investment in the Islamic Republic. Araqchi also took aim at the Trump administration’s criticisms of the nuclear pact, including concerns over its limited duration. “There is no sunset clause in the JCPOA,” the deputy foreign minister said before accusing the White House of risking “another nuclear crisis”.

Specific restrictions on the Iranian nuclear program do in fact begin to expire 10 years after the implementation of the JCPOA. However, Iran would then remain subject to the terms of international nonproliferation agreements.

Tehran has accused the US of undermining the nuclear deal by discouraging banks and would-be investors from doing business with Iranian entities. Media reports generally agree that the persistent threat of new or re-imposed economic sanctions is a factor in those investors’ decision-making. But opportunities exist for the Trump administration to fire back at the Iranian narrative and highlight additional factors for which the Iranian regime itself is responsible.

The Washington Institute pointed to one such opportunity with an analysis of the obstacles facing Iranian compliance with the Financial Action Task Force, which identifies global markets that are deemed to be at high risk of money laundering. Tehran is frequently described as the world’s leading state-sponsor of terrorism, and the FATF calls for all nations to fully criminalize terrorist financing. As such, there are serious doubts about Iran’s ability and willingness to come into compliance with FATF standards, especially in light of the regime’s open dispute of the definition of “terrorism” as it applies to entities like Hezbollah and Hamas.

The Washington Institute also observed that this non-compliance has led the Iranian economy into creating its own “catch-22”, in that companies “continue to engage in deceptive practices to overcome the reluctance that international banks have exhibited [even though] such practices are the very thing that causes this reluctance in the first place.”

For those who have criticized the Trump administration for short-sighted focus on upending the JCPOA, emphasis on these deceptive practices and ongoing terrorist financing may seem like better alternatives. By calling attention to these things, the administration may not create global aversion to the nuclear deal itself, but may effectively counter the Iranian narratives that push Europe to implement it in a more generous fashion.

Toward that end, another topic that might be put more directly in the spotlight by the US government is the recent report of forays into cryptocurrency by the Iranian Central Bank. Coin Telegraph reported on Thursday that Tehran had previously embraced the popular digital currency Bitcoin, but has since shifted tone with an appeal to “control and prevent” such currencies. This reportedly means moving to locally-developed alternatives, much as the regime has sought to do with online messenger apps.

According to CNBC, this links the Islamic Republic to the efforts of other “rogue states” to use alternative currencies in the bypass of Western sanctions. Russia, a key Iranian ally, has introduced a state cryptocurrency as a more “stable” alternative to Bitcoin, while Venezuela has created an oil-backed cryptocurrency that is more stable than the nation’s official currency, as well as being more useful in illicit global transactions.

Iran is facing an inflation crisis not unlike Venezuela’s. Recent mass protests in dozens of Iranian cities were reportedly sparked by outrage over such economic indicators. The threat of more such protests makes it more imperative for the government to combat the effects of persistent isolation away from the global economy. But if the regime’s critics can credibly portray it as doing so through deception, rather than by negotiating in good faith with the international community, it may lead to more broadly coordinated action against that regime over the long term.