INU – irannewsupdate.com – Mohammad Yousef Raisi, of the southern province of Sistan-Baluchestan, is the coach of the Iranian national juvenile cricket team, and former member of the cricket confederation. He also sat on a technical committee for Iranian cricket and was then the captain of the adult-division national team. After beginning to coach for the juvenile and youth leagues in 2007, he went on to acquire a first class cricket referee license from Sri Lanka in 2011.

In an interview with Mehr News Agency, Raisi explained that while this long list of accomplishments have helped him to achieve the respect of his colleagues and renown throughout the world of cricket, they have done very little to help him make a living. Because of this, in order to earn bread and water, Raisi works as an independent street vendor, operating from a worn chair on the main street in the city of Nikshahr, selling gasoline portioned into bottles. 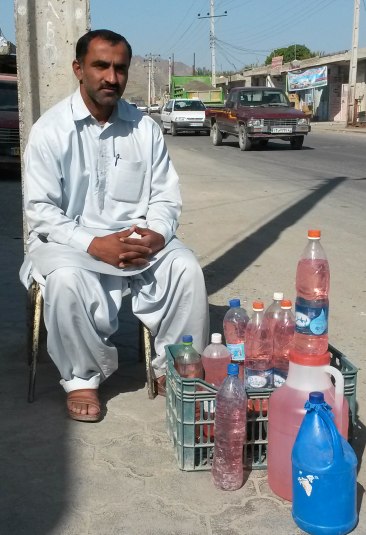 It is not the first venture that Raisi has attempted as he struggled to make ends meet while also developing his considerable cricket talents on the side. Earlier, Raisi owned a 1984 Toyota pickup truck, which he used to haul materials for pay. With his earnings, he was eventually able to open a business selling building materials. But, as he explained in his interview with Mehr, when the government imposed an 11 million toman tax, he was forced to shutter his operations, leaving him with no way to provide for his family.

The forced closure of his business led directly to his desperate attempt to make money by selling gasoline at the roadside.

Of course, despite Raisi’s embattled situation, cricket remains as his career passion, even though he has been frustrated at many turns by the obstacles that he faces in trying to pursue it. These obstacles aren’t limited to the lack of financial incentives, but also include a pervading sense that authorities at both the national and the provincial levels have been ignoring his appeals, and those of other Iranian fans of the sport.

This lack of support is, unfortunately, easy to explain in terms of the fundamentalist vision that the government continues to pursue for Iran. In addition to the financial mismanagement and economic disparities that helped to force Raisi out of business, the narrow cultural focus of national-level authorities tends to exclude potentially beneficial programs in the fields of sports and the arts.

Raisi reports that since 2004 he has been asking federation officials to set up an education program for the youth of Sistan-Baluchestan, which Raisi would teach. To date, these requests have met with no response. Governors and provincial authorities have been similarly silent, to the frustration of Raisi and many of the people who believe their area would benefit from such a program.

“I am a coach and I love the game of cricket,” said Raisi. “And everybody knows that in this province there are lots of talented people, but regrettably [the authorities] pay no attention to this potential.”

Raisi believes that his own situation is representative of the hardships faced by many talented Iranian cricket players, and that it bodes ill for the future of the sport. Without funding or even government interest in the cricket program, Iran is at a serious disadvantage in attempts to compete on the worlds stage.

“Unfortunately, we play cricket in sand and cement fields [in Sistan-Baluchestan]. Therefore, the speed and rotation of the ball in the standard field is by no means comparable with the way of our game is played,” Raisi explained.

But in spite of these disadvantages, Raisi has managed to lead players to vice-championship in the under-16 age group – an accomplishment that he believes showcases the potential for cricket players in Sistan-Baluchestan and in Iran as a whole. 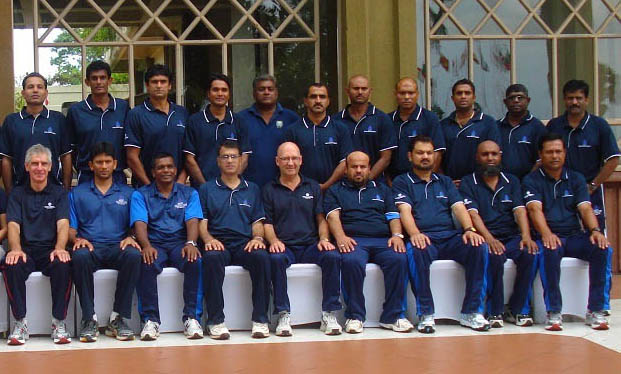 100 young cricket players are active in Nikshahr township, and Raisi hopes to soon be able to prepare a field in which to gather them, even as he continues struggling to sell gasoline at the side of the road.

“I have no request for myself from the authorities,” Raisi explained, “and I even don’t expect one rial of assistance. I have coached for the national team up until now and did not receive one rial for it. But by disregarding the young generation and letting their talents go to waste in absence of facilities, the authorities are committing a sin.”