“Workers that work with their families with simple jobs in these factories are mainly from the country’s poor provinces such as Khorasan, Kurdistan and … that move to Tehran to work as seasonal brick factory workers,” said Ali Hosseinian, Secretary of the Tehran Province Brick Factory Labor Association, to the state-run ILNA news agency on April 1st.

In this regard the Economy Online website reported on 21 September 2013:

30,000 brick factory workers are among the country’s most deprived workers.

“Deprivation and poverty has forced the families of these workers to work in groups and the age of these laborers, engaged in very hard labor, has seriously decreased and there are even six year olds found in these factories.”

Due to the increase in production and increased revenue, the workers’ families all work together to bring in more income and therefore, the children of these families work in these brick factories at very young ages along with mothers and fathers.” 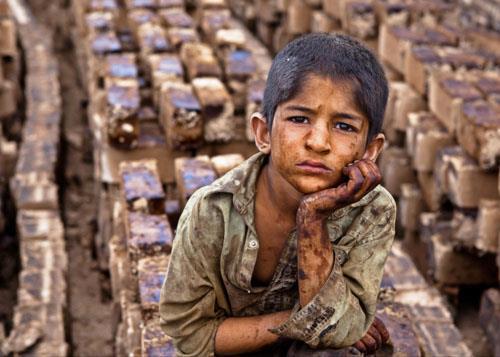 “The law prohibits children under the age of 15 working in brick factories,” said the head of the Brick Factory Labor Association. “However, there is no such law enforcement in brick factories. Women are involved in work that is out of their physical ability, and many of them give life to their children in these brick factories. Pregnancy leave is not familiar to these women. After birth they place their children in cradles and return to work. A few years later, these children are seen along with their parents, with no care for the law, working hard in these brick factories. Considering the impartial list of insurance that is reported for brick factory workers, most of them must work 70 to 80 years to come under retirement laws, which is impossible.”