Like All Iran Regime’s Created Disasters, the Case of Metropol Collapse Has Been Closed

(Reuters) – Four senior senators on Monday urged President Barack Obama to stick to tough policies against Iran, despite overtures from Tehran ahead of this week’s U.N. General Assembly in New York.

In a pair of letters, Democrats Robert Menendez and Charles Schumer, and Republicans Lindsey Graham and John McCain, said Obama should use his U.N. speech to restate the U.S. goal of stopping Iran from achieving nuclear weapons capability and demanding verifiable actions from Tehran.

“Like you, we viewed the election of (Iranian President) Hassan Rouhani as an indicator of discontent amongst the Iranian people and we have taken note of recent diplomatic overtures by Iran. However, whatever nice words we may hear from Mr. Rouhani, it is Iranian action that matters,” Menendez and Graham said in their letter.

Menendez is the chairman of the Senate Foreign Relations Committee, and Graham is an influential voice on international issues. 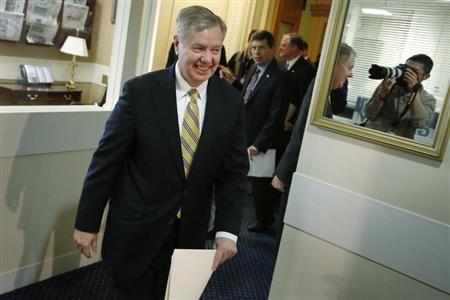 Schumer, the third-ranking Senate Democrat, and McCain, another leader on foreign policy, wrote to Obama urging him not to let up on tough sanctions imposed on Iran.

“With the world’s attention on Syria and other matters, this is an opportunity to reinforce that there will be absolutely no relaxing of pressure on the Iranians until the entirety of their nuclear situation has been addressed,” they said.

Obama’s administration has been crafting a response to favorable gestures toward the United States from Rouhani, who travels to New York for his debut address at the United Nations this week amid talk he may have a face-to-face meeting with Obama.

Rouhani is expected to pursue a charm offensive in New York to set the tone for further nuclear talks with world powers, which he hopes will bring relief from the sanctions imposed over suspicions Tehran intends to develop nuclear weapons capability. Iran says the program is purely peaceful.

But even tighter sanctions have broad support in Congress. Schumer and Menendez are members of the Senate Banking Committee, which is expected to soon begin debating its version of a package of tougher sanctions that easily passed in the House of Representatives in July.

Many Buildings in Tehran in Danger of Collapse