While news of new victims of the second wave of the coronavirus in Iran is pressuring society, news about new infected and the arrival of the third wave of the coronavirus is inundating Iran’s society. Meanwhile, Iraj Harirchi, Iran’s Director of National Center for Fight with Coronavirus, appeared on state television and explicitly stated that: “We have passed the wave and are now facing a stormy ocean.”

Looking at the actions of the incompetent officials of Iran’s government, it can be clearly seen that this stormy coronavirus ocean, is the solution of Iran’s Supreme Leader Ali Khamenei to counter the popular uprisings, and Khamenei is still moving in this direction.

Between June and September of 2020, Hassan Rouhani’s government and all the responsible apparatuses, not only ignored these warnings but on the contrary, did their utmost to pollute the people by holding Muharram mourning ceremonies and holding the national entrance exam. As one member of the government parliament said, “It seems that the relevant officials are deliberately killing people by adopting such policies.”

The spokesman for the Rouhani government’s health ministry said that this week, the number of cities with a red status has increased from 88 to 109.

Harirchi said: “The hospital is not a place to fight the coronavirus, but the hospital is the end line and the risk of death in it is very high.”

Tabarsi, the deputy director of Masih Daneshvari Hospital, also stated in this regard: “If we continue in the same way, in November, the death toll will reach 600 people per day.”

The head of Shushtar University of Medical Sciences summed up the last word and said in despair: “We will have deadly days ahead.”

Meanwhile, Hassan Rouhani, who intends to infect most of the people, by normalizing the situation and to justify his inadequacies, blames the people for their neglect.

Opening the schools is one of his actions which was sure with the coordination of Khamenei.

He running the people in circles for several days about the method of face-to-face and virtual school, and finally, in the last hours, he came on the scene and told the people that the schools will be held in face-to-face and there is no need for anyone to contact the schools and educational centers about a virtual school, and everyone is obliged to attend the classes.

The decision was made at a time when no solution was yet in place for the student social distances, and crowded schools began to accommodate more students than allowed, even under normal circumstances.

Khamenei seems intent on locking up society with the coronavirus while government officials are in quarantined areas and protected from the virus, Iran watchers say.

The volcanic situation in Iran today has reached a state of maturity that even some government officials regularly warn of the danger of an uprising. For this reason, Khamenei has decided to instill fear in the people and prevent any uprising with more executions and harsh sentences mostly for those arrested in the past protests.

Khamenei’s policy is what he explicitly stated from the first days of the arrival of the coronavirus: he wants to turn the coronavirus into a blessing instead of a burden.

That is why they are sending the people to a ‘coronavirus massacre.’ As his regime’s bones are crumbling under the guise of illegitimacy and sanctions, he feels has bought himself a chance, until the result of the US election in the hope of a change in the favor of its regime, some Iran experts say.

Stanford Under the Influence of Iran’s Lobby? 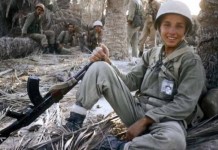 Fearing a new round of nationwide protests, Iran’s judiciary chief Ebrahim Raisi published a botched document as the 'judicial security document.' According to the document,...
Read more
General

The role of Iran’s Revolutionary Guards (IRGC) in destroying the environment, is among the areas that the IRGC has destroyed in the last four...
Read more
General