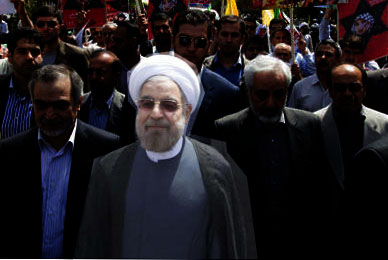 Mullah Mostafa Pour-Mohammadi, minister of Justice, one of the most senior officials responsible for massacre of 30,000 political prisoners in 1988

The National Council of Resistance of Iran, the coalition of Iranian opposition movements and personalities has announced in a statement that the cabinet to be appointed by Hassan Rouhani to the parliament is comprised of senior officials of the regime who have in past three decades played highly significant roles in war, suppression, and export of terrorism and fundamentalism.  The NCRI stressed that none of the cabinet members have been chosen from outside the circle of mullahs’ regime officials of the past 34 years, and not one woman has been nominated for a ministerial post.

According to the NCRI:

Mullah Mostafa Pour-Mohammadi, the candidate for Ministry of Justice, is one of the most notorious criminals in the regime.  He worked for years as deputy to the minister of intelligence and in that position he was the principal member of the 3-man “Death Committee” that played the most prominent role in the massacre of 30,000 political prisoners, primarily activists of the Peoples’ Mojahedin Organization of Iran (PMOI/MEK) in 1988.

Subsequently, Ali Rabi’ie became executive secretary of the Supreme National Security Council during Khatami’s presidency and he followed up intelligence issues with Hassan Rouhani. In the University of the Ministry of Intelligence, called Imam Bagher, he was professor of psychological warfare.

Mullah Seyyed Mahmoud Alavi, the candidate for minister of Intelligence, was directly responsible for writing the laws for Ministry of Intelligence in the first parliament of the clerical regime. He is currently a member of supreme leader’s Assembly of Experts. During the years 1989-1991, he was head of Supervision and Inspection, and of the Public Relations and Propaganda departments of the espionage and suppression organ called “Ideological-Political” in the Ministry of Defense and Support for the armed forces. And during 2000 to 2009, he was head of the “Ideological-Political” organization of the army that played a very important role in suppression of anti-regime personnel in the army.

On Saturday, August 3, on the eve of inauguration of Rouhani, Mrs. Maryam Rajavi, the President-elect of the Iranian Resistance declared: “Talking about a moderate president in the religious fascism ruling Iran, where the power and all key institutions are controlled by the Supreme Leader, is nothing but deception.”

She added “For the past three decades, Rouhani has been an insider and key figure in the regime’s military, security and Intelligence system. He was Secretary of the Supreme National Security Council for sixteen years. He was also a member of the Supreme Defense Council for many years. He has acknowledged that he actively participated in the crackdown of the student uprising in the summer of 1999. As the clerical regime’s lead negotiator on nuclear issues in the past decade, he explicitly prides himself in having duped the world community over the regime’s efforts to obtain a nuclear bomb.

The Iranian regime will try once again to deceive the international community under the pretext of a new president and buy more time for its dangerous projects such as obtaining nuclear bomb, saving the Syrian dictator and imposing its absolute hegemony in Iraq.

While the regime through Rouhani pretends to be interested in negotiation with the international community, at the same time it has accelerated its drive to produce a nuclear bomb, and dispatching forces and shipping Arms to Syria through Iraq.”

Mrs. Rajavi stipulated: “No change is imaginable in Iran without the release of political prisoners, freedom of expression, freedom of political parties, cessation of transgressing and meddling in Syria and Iraq, and ending the project to attain a nuclear weapon. In the 50 days after the election and in various circumstances, Rouhani has lucidly shown that he neither wants nor can bring any change to any of the above realms.”