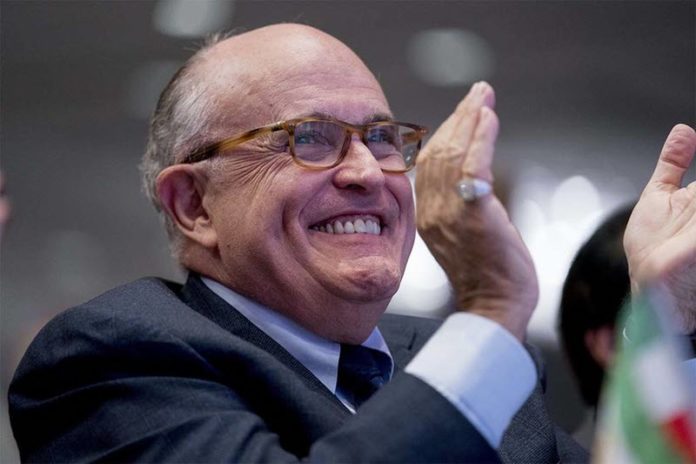 This is not the first time that we have heard about regime change in Iran. The Iranian opposition, the National Council of Resistance of Iran (NCRI), for years has argued that nothing will ever improve in Iran until the regime is removed and replaced with a democratic leadership that will respect the human rights of the people.

The NCRI has an international following and every year in France, hundreds of former and current parliamentarians, leaders, human rights activists, dignitaries, and so on, gather to support the opposition in its quest to make Iran free.

At the weekend, former Mayor of New York City and Trump’s latest legal advisor Rudy Giuliani said that the US President is “committed” to regime change in Iran.

Giuliani said that regime change in Iran is the only way to guarantee peace and security in the Middle East and emphasised that the Iran threat is much more serious than the Israeli-Palestinian deal.

His comments came just after speaking at the Iran Freedom Convention for Democracy and Human Rights in Washington. The Organization of Iranian-American Communities hosted the event and emphasised its role in promoting democracy in Iran. Like the NCRI, it backed and supported the protests that started at the end of last year.

The future of the Iran nuclear deal is in turmoil at the minute. We will know this weekend whether Trump is going to continue to waive sanctions or not, but all indications point towards him not. Trump is very wary of the Iranian regime and during the recent protests he sent messages of support to the people of Iran on social media.

In a message on Twitter he said: “Big protests in Iran. The people are finally getting wise as to how their money and wealth is being stolen and squandered on terrorism. Looks like they will not take it any longer. The USA is watching very closely for human rights violations!”

He also said that it was “time for change” in Iran, alluding to regime change, and he said he would provide the people with the support when the time is right.

The regime change has been struggling in recent years and this has accelerated in the past few months. It knows that it is going to fall from power very soon and the tension between the different factions is made public via state media.

The people, with the support of the international community, can peacefully bring peace, security and freedom to their country via regime change.