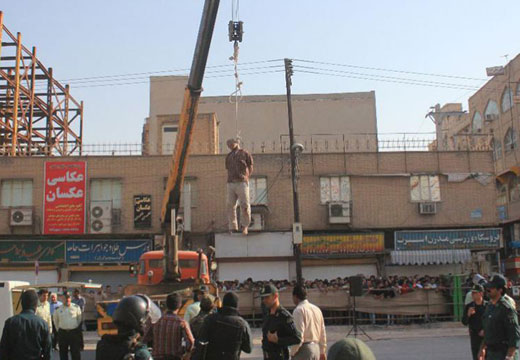 Washington Free Beacon- Adam Kredo: The chairman of a German company whose cranes are reportedly being used for public hangings in Iran lashed out at critics and dismissed calls for his company to end its relationship with Tehran on humanitarian grounds.

German construction company Atlas has come under fire from advocacy groups for purportedly supplying cranes to Iran, which then uses them to publicly hang opposition leaders and others. Iran is a world leader in executions, killing 529 citizens last year mostly by hanging. Another 40 people were hanged over two weeks in January, and about two Iranians are being executed a day under President Hassan Rouhani. The name Atlas can be seen on the cranes in several photographs of Iran’s public hanging ceremonies, in which a masked executioner strings up a man as locals gather to watch, often with their children. The photographs prompted the advocacy group United Against Nuclear Iran (UANI) to write Atlas Chairman Fil Filipov to demand that his company “immediately terminate all business activities in Iran.” Atlas, which appears to be represented in Iran by an affiliate named Hydro Atlas, says it is not doing business with Iran and does not know how its equipment made its way to the country. “We do not ship any cranes to this country!” Filipov told the Washington Free Beaconvia email when asked about the pictures showing its cranes being used in hangings. Filipov dismissed humanitarian concerns in a series of emails to the Free Beacon and said he has “no idea” how his company’s equipment ended up in Iran. Asked if he was concerned that Atlas cranes were being used in executions, Filipov responded, “We are not the police … we make over 2,000 cranes per year and do not know who imports cranes where … Atlas does not sell cranes to this country!” “Sure we have an issue” with the equipment being used to kill people, because “cranes are made to be used in construction … what do you suggest Atlas can do?” wrote Filipov, the author of Filosophies: A Bulgarian Refugee’s Autobiography and Provocative Approach to Business Success. When pressed further on the issue, Filipov said he has “no idea” if Atlas cranes have been used to hang Iranians. “I have no idea—have NEVER been to that country and do not know it,” he wrote, adding he does “not understand” what exactly is taking place. “I have no idea,” he wrote when asked how the cranes may have made it to Iran. “No one has given out any serial numbers so we can check where was the crane sold to???” Asked if it was false for UANI to claim that Atlas cranes are being utilized in executions, Filipov again responded, “I have no idea.” When presented with UANI’s letter and photographic evidence purporting to show people hanging from Atlas cranes, Filipov dismissed the group as “crazy people.” “I have no time to deal with crazy people writing whatever without any substantiations … already work 20 hrs per day to keep the businesses afloat and!! [sic]” he wrote. UANI spokesman Nathan Carleton said Filipov should to be more accountable given Iran’s record of human rights abuses. “It is regrettable that Mr. Filipov is not more concerned with this situation—it is a very serious matter,” Carleton told the Free Beacon. “Instead of making such flippant responses, Mr. Filipov should explain how his cranes got to Iran and why there is an Iranian firm calling itself his business partner and using his logo.” UANI CEO Mark Wallace earlier this month called on Atlas to “leave Iran.” “Lest there be any doubt about the risks for all responsible companies of doing business in Iran, each and every business worldwide that is considering entering the Iran market should look at the morbid pictures of dead Iranians hanging by their necks from Atlas cranes. Iran is not open for business,” Wallace said in a statement issued at the time. Filipov did not publicly respond to Wallace’s letter, which was sent as part of UANI’s Cranes Campaign aimed at stopping companies from dealing with Tehran. Several top crane manufactures – including Palfinger, Terex, Liebherr, Tadano,Konecranes, and UNIC—have ceased dealings with Iran since the campaign was launched in 2011. Executions in Iran have spiked since Rouhani assumed office, leading several advocacy groups to level harsh criticism. Iran hanged 19 prisoners in just one day in January, prompting outcry from human rights observers. February 19, 2014