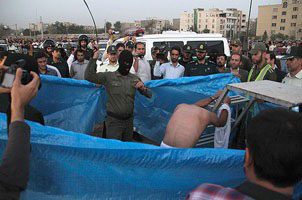 Twelve of these prisoners were executed in the city of Karaj alone on Wednesday, August 6. Eleven prisoners, including one identified as Abbas Khorshidie, were hanged in the central prison of this city.

Reza Fallah a 27-year-old prisoner was also hanged in public on the same day in this city. Before hanging the victim, the henchmen flogged him 100 times as the crowd watched in shock.

Seven prisoners were hanged in two groups in public on August 3 and 6.

Fearing social uprisings, the criminal rulers in Iran conduct these atrocities under the pretext of “implementing God’s decree.” They widely publish shocking photos of the hangings in an attempt to intensify the climate of fear in the country.