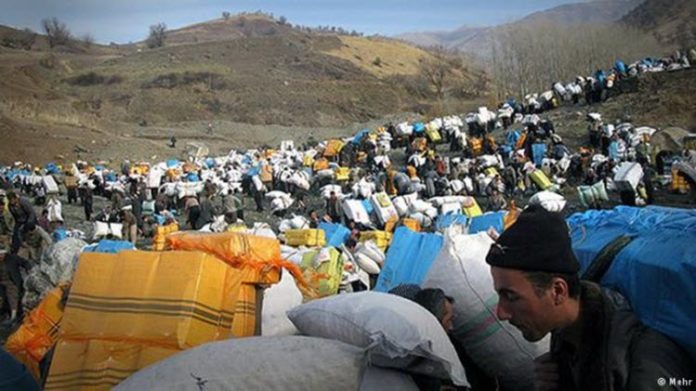 The job is dangerous enough for the less vulnerable people, because porters have to contend with extreme weather conditions and uneven terrain. They are also targeted by the State Security Force, as the Iranian regime’s laws criminalize the work of a porter which is punishable by prison or a fine.

On July 30th, some porters were attacked by border police at a village near the city of Sardasht, western Iran, who killed one, and left two others seriously wounded. The next night, July 31st, Iran’s forces opened fire on another group of porters. Azad Mina-Abduli, one of the porters, was seriously wounded.

Previously, on June 25th another porter by the name of Karim Mohammad Aminzadeh, also from the city of Sardasht, lost his life when forces opened fire. Mohammad Ahmadiyan, a second porter, was seriously wounded.

Two more porters from the cities of Sardasht and Piranshahr were also seriously wounded on June 29, when forces opened fire and a landmine exploded.

These porters are attacked and shot as they work to support their families. This, at a time when $25 billion worth of goods are smuggled each year, according to Iranian MP Hossein-Ali Haji Doleigani. This amount of money is three times the country’s entire construction budget.

According to a story published by state-run media onJune 19, 2016, smuggling goods and currency has led to 800,000 people being unemployed. These contracts are controlled by Iranian Supreme Leader Ali Khamenei, the Revolutionary Guards (IRGC) and other security and intelligence entities.

On March 7th, at a press conference in London, the Iranian Resistance revealed that 90 ports, meaning 45% of all of Iran’s ports, are used for smuggling. These ports are mainly placed at the IRGC’s disposal.

Solidarity with the victims’ families is called for by The Iranian Resistance. They urge all the people, especially the youth in border areas, to support the hardworking porters. Strong condemnation of the regime for its crimes against Iran’s hardworking laborers is also called for, from all international labor organizations, by The Iranian Resistance.