Mrs. Shole Pakravan speaking to FoxNews.com via Skype said: “The only thing I want … from God, from people around the world … in any way, in any form, is I just want to bring Rayhaneh back home.”

“I wish they would come tie a rope around my neck and kill me instead, but to allow Rayhaneh to come back home.” 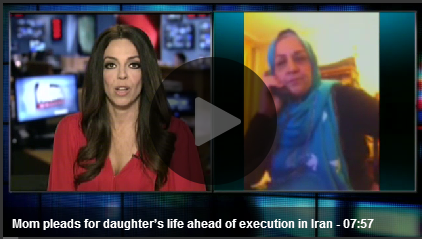 Ms. Jabbari, a decorator, has been in prison since seven and a half years ago when she stabbed a member of the Iranian regime’s Ministry of Intelligence and Security. In a deceptive scheme, this intelligence agent intended to sexually assault her which forced her into defending herself.

The scuffle led to the death of intelligence agent. The henchmen of the clerical regime placed Rayhaneh under savage tortures to extract forced confession.

Pakravan and her family have been protesting outside of Rajaiy Shahr Prison in hopes of drawing attention to Jabbari’s case.

She said: “The only thing I want in this universe is for Rayhaneh to be released. I have done everything I can think of,”. “I am a mother. No mother can accept the death of her child.”

The death sentence for Jabbari has gained widespread condemnation from international organizations.

“This abhorrent execution must not be allowed to take place, particularly when there are serious doubts about the circumstances of the killing,” said Hassiba Hadj Sahraoui, Middle East and North Africa deputy director at Amnesty International. “Instead of continuing to execute people, authorities in Iran should reform their judicial system, which dangerously relies on processes which fail to meet international law and standards for fair trial.”

The Friends of a Free Iran in the European Parliament (FOFI) expressed outrage over the report of Reyhaneh Jabbari’s imminent execution and the massive use of death penalty against the Iranian people under the so called moderate Hassan Rouhani.

Speaking from Brussels, Gérard Deprez, the chair of FOFI said “Hassan Rouhani’s government has been hanging more than 1000 people, many of the in public squares in Iranian cities. This is the worst record by any Iranian president for the past 25 years.”