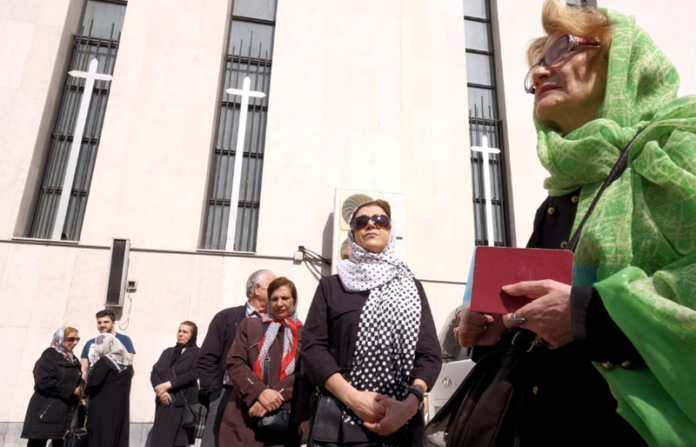 Most disturbingly, the Regime has executed dozens of Christian missionaries and has the power to hand down the death sentence for Christians who convert from Islam. This is rarely used because the Regime is terrified of international uproar, but thousands have been imprisoned or placed in exile merely for exercising their faith.

Frank Nikabkht, an Iranian American Jewish activist who heads the LA-based Committee for Minority Rights in Iran, explained that the Iranian Regime has been fighting a war against those converting to Christianity and even those born into the faith in recent years. He reports that they’ve even closed Christian cemeteries, so people wishing to visit their loved ones’ grave have been forced to throw flower bouquets over the walls.

The Regime has cracked down on underground churches in Iran where converts from Islam worship, through the use of undercover agents from the Revolutionary Guards or other security forces. This has led to many arrests in recent months. Even the few legal churches in Iran had to have a full list of their congregation, which would be checked by intelligence ministry agents as the church members entered.

So why does the Regime see Christianity and the underground evangelical churches as a threat?

Well simply, because their goal is to eliminate other religions in order to gain greater control over the population and over the region. Given that this increased crackdown is happening at a time when there is mass dissatisfaction with the ruling mullahs, we can see that this is nothing but a power grab.

The international community, in particular, those still a party to the 2015 Iran Deal, must speak out against these abuses, rather than remain silent to protect their business dealings with the Iran Regime. If those countries fail to do so, particularly the European nations, then it will look like they don’t care.

Nikabkht said: “Obviously, human rights violations are not a concern of the European powers.”

Of course, the Iranian Regime’s abuses are not limited to Christians or Jews or religious minorities. The mullahs are the biggest threat to the human rights and basic freedoms of every Iranian. The only solution to this pressing problem is regime change by and for the people of Iran.