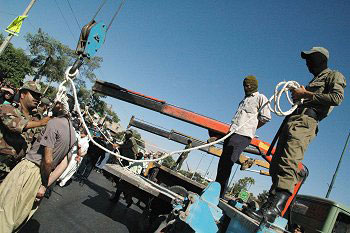 The two men were identified by their initials as A.M. and M.A., according to the report by Tasnimnews affiliated to the terrorist Quds Force of the Iranian regime.

The report said “Qisas (law of retribution) was carried out for the two prisners in Bandar Abbas Prison”.

he rate of hangings has increased sharply over last year, since Hassan Rouhani, the regime’s new president has taken office.

“The new government has not changed its approach regarding the application of the death penalty and seems to have followed the practice of previous administrations, which relied heavily on the death penalty to combat crime,” Ban said.