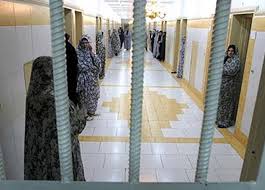 Female detainees in Iran’s prisons face an uncertain future amid reports by human rights organizations of the systematic abuse women are subjected to in Iranian detention facilities.

Activist Narges Mohammadi was arrested in May this year and was taken to the notorious Evin prison, north of Tehran where she is resuming a six-year sentence, according to Reporters Without Borders.

She was first detained in 2007 when she suffered from epilepsy and muscular dystrophy in Evin.

Today, Mohammadi’s continues to deteriorate as officials refuse to provide access to proper medical attention, according to the Al Arabiya report.

Mohammadi works closely with 2003 Nobel Peace Prize laureate Shirin Ebadi, who authorities harassed prompting her to leave Iran in 2009. Her sister was arrested following her departure, an effort by Tehran to mount pressure on Ebadi, Al Arabiya reported.

More recently, cartoonist Atena Farghadani was sentenced to more than 12 years jail after drawing a caricature depicting members of Iranian parliament as animals.

Farghadani’s cartoon was in protest at a draft law that would have limited access to birth control and forms of contraceptives in Iran. Should the legislation pass, Amnesty International said it would set back women’s rights in Iran by decades.

Fardghadani and Mohammadi are two of scores of a rising number of women being detained by the Iranian regime.

The number spiked following the 2009 Green Movement which saw protestors march through the streets of Tehran following the controversial reelection of then president Mahmoud Ahmadinejad.