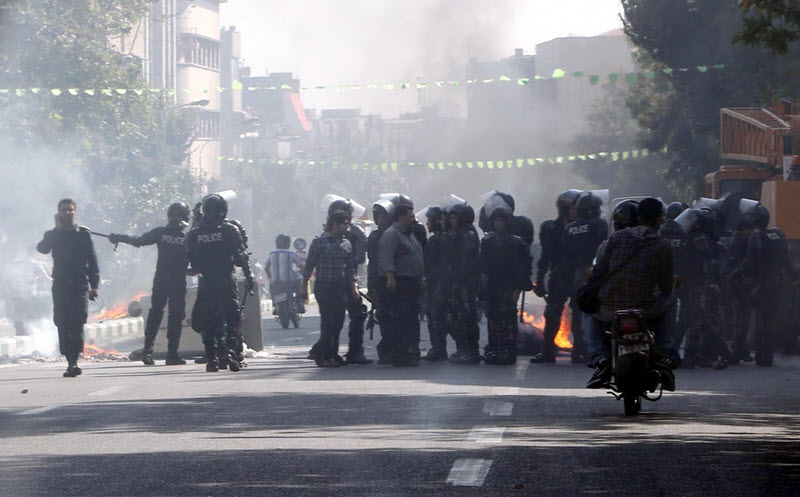 “Iranians are fed up with the ruling system and both its factions,” Iran research fellow at the Foundation for Defense of Democracies, Saeed Ghasseminejad, said in an interview. “Over the last year, dollar appreciated 140 percent against rial. The government is selling oil to fund terrorist groups and its military adventures in the region while Iranians become poorer and poorer every day.”

Many Iranians have begun stockpiling staples, as the price of food continues to rise.

The National Council of Resistance of Iran (NCRI) reports that what they call the regime’s mafia bands are exacerbating the problem, because they are allowed to buy currency at the government’s rate, and then and resell it for twice what they paid, devaluing the currency further.

While the Iranian people struggle to pay for food and essential items, the government does little to address their problems. Government attempts to “control the currency rate” have failed.

On Sunday, a number of merchants closed their shops and went on strike to protest the falling currency rate. The people’s anger grew, until Monday night, when a large group of protesters, mostly middle-class merchants and supporters, gathered at the Grand Bazaar in the center of Tehran and shut down shops there.

The MEK network inside Iran reports that people chanted:

The protesters continued to march, even after security forces attacked them with tear gas. Many gathered on the steps of Parliament as the government denied the existence of the protest. In the same manner as many of the recent protests Iran, people began to voice their larger concerns, and called for regime change. MEK network members inside Iran were able to capture video of the protesters chanting, “Death to the dictator!”

Economic, political, and human rights conditions are getting worse in Iran. Leadership is weakening in the face of international, as well as domestic, pressure. Now is the time to chose an alternative. The Iranian opposition and its supporters will gather in Paris on June 30th to discuss a free and democratic alternative to the clerical rule. More information about the “Free Iran” event may be found here.