In Washington D.C. hundreds of MEK supporters gathered in front of the Whitehouse on Saturday, February 8, 2020, showing solidarity with the uprisings in Iran and demanding the immediate release of the detained protesters.

The demonstrators holding the colorful Iranian flags expressed their full support for the People’s Mojahedin Organization of Iran’s Resistance Units, who are at the forefront of the free Iran uprising. The demonstrators chanted slogans calling for regime change in Iran as the only solution to the dictatorship ruling Iran.

Protesters held pictures of some of the 1500 martyrs who were slain during last November’s protests by the Iranian regime brutal IRGC and Basiji forces.

One of the prominent speakers at the Washington D.C. rally was the former U.S. representative, Judge Ted Poe, former chair of the U.S. House Foreign Affairs Subcommittee on Terrorism, Nonproliferation. Judge Poe, referring to the destructive role the Iranian regime has had to its people, suggested that the regime will not last long, just as the notorious Qassem Soleimani did not. Judge Poe said: “Soleimani’s job for years was to oppress, assault and murder Iranians, Syrians, and Americans, but he is gone. And it’s good that he is gone, because he was the number one terrorist in the world, in a (regime) that is the number one terrorist in the world. He had killed Iranians throughout the world, and he was instrumental in killing Iranians in Camp Ashraf and in Camp Liberty.” 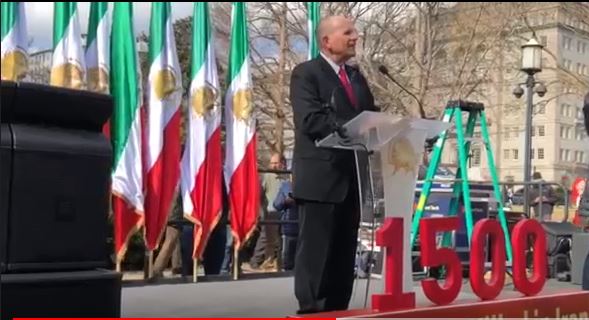 Judge Poe offered his support for the protesters in Iran and quoting Thomas Jefferson, said: When governments become destructive to those ends, it’s the right of the people to alter or abolish that government.”

Embraced by the enthusiastic crowd, and supporters of MEK, Judge Poe urged Western governments to support the protesters in Iran, and called on his government to “make sure that the internet is free and available to the people in Iran so that they can talk to each other about freedom”. 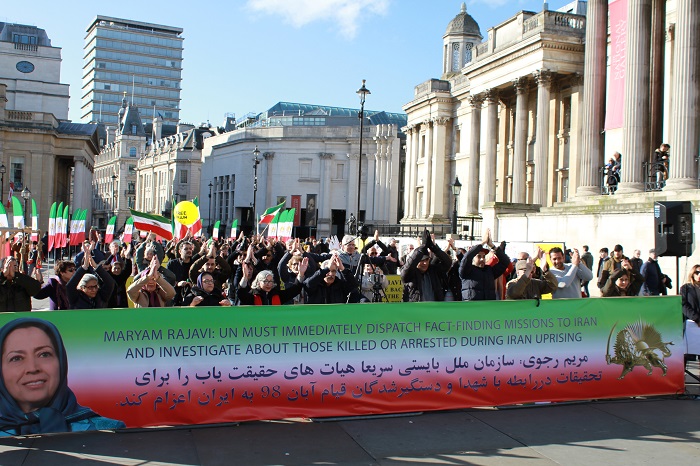 In London, hundreds of supporters of the MEK and NCRI, gathered at Trafalgar Square to show solidarity with the Iranian uprisings for regime change in Iran. The rally started by paying tribute to the 1500 martyrs of the November 2019 Iran protests. The rally also marked the 41st anniversary of the 1979 anti-monarchy revolution, which is still in pursuit of freedom and democracy, and recalled the popular slogans during the recent Students protests this January, chanting “Down with the oppressor, be it the Shah or Khamenei”.

Dr. Matthew Offord, MP, speaking at the rally, stated support and solidarity with the people of Iran and their uprising to achieve freedom and democracy in Iran. Dr. Offord said: “We call upon all governments to recognize Madam [Maryam] Rajavi as the legitimate opposition to the regime in Iran. We call upon the international community to accept Madam Rajavi’s ten-point plan for Iran. A plan that seeks to promote a secular, non-nuclear, judicial Iran, with respect to minorities, and where women and children are respected. The International community must hear Iran’s cry and Iran indeed must see change.”

Mr. Mark William, MP, spoke at the rally, expressing his support for the Iranian resistance under the leadership of the President-elect of the National Council of Resistance of Iran (NCRI). Mr. Williams reminded everyone that the democratic aspirations of the Iranian people in 1979 were highjacked by the now ruling theocracy. He also recalled the atrocities of the Iranian regime, particularly the 1988 massacre of over 30,000 political prisoners who were slain by the direct fatwa of the then regime supreme leader, Khomeini.

Mr. Williams called on the UK government and its allies in the European Union “to put pressure on the Iranian regime to release all political prisoners and all detained dual citizens and all of the latest detainees after the demonstrations.”

“We call on the United Nations to send fact-finding missions to explore the truth of what happened in 1988.” He added.

Mr. Williams emphasized that “we must take immediate actions at the United Nations Security Council to declare the leaders of this regime as perpetrators of crimes against humanity, for the four decades of systematic torture and abuse. Those responsible must be held to account.”

Rallies took place in Amsterdam and in Geneva as well, in solidarity with the Iranian protests and in support of the MEK, the principal opposition group.