Those responsible for the massacre resort to ploys to undermine the investigations in a bid to evade consequences of their crime against humanity
NCRI – Reliable documents obtained from inside the Iranian regime which can be presented to any international court reveals that agents of Jamil Shemri, Head of the Diyala Police in Iraq has been ordered by Nouri al-Maliki and the Prime Ministry’s committee tasked with suppression of Camp Ashraf residents to offset an impartial and independent investigation of the crime against humanity which occurred in Camp Ashraf by stage shows and false reports produced by the so-called committee of investigation.

The Maliki-style investigations is planned to, most ridiculously, represent the victims as perpetrators of the massacre in Camp Ashraf.

The documents reveal that the following points and items are to appear in this so-called investigations by Jami Shemri:

1. Camp Ashraf residents did not allow the police and Iraqi forces to enter the camp for investigations at the time of the incident and days and by relocating the bodies of those killed, tried to change and manipulate the evidence!

2. Execution and delivering coup de grace while hand cuffed, are not true. When the bodies were delivered to the Iraqi forces, no handcuffs could be observed and Ashraf residents had removed them!

3. Ashraf residents did not allow the Iraqi forces to enter Camp Ashraf following the attack since they did not want the Iraqi side to learn of their equipments and weapons!

5. When Iraqi forces and UNAMI were at Camp Ashraf, the members of the People’s Mojahedin Organization of Iran (PMOI/MEK) intended to blow up one of the explosive packages using a remote controller, but Iraqi technicians prevented it!

6. Residents did not deliver any of the films taken by their security cameras to the Iraqi forces for use in the investigations!

7. There are signs indicating that the residents knew of the attack prior to the incident but did not inform the Iraqi forces in charge of Ashraf protection!

Falsifications, stage-acting, and investigations conducted by Maliki about the crime he himself committed, is a known tactic and does not deceive  any one.

First- After the attacks in July 2009 and April 2011 the Iraqi government also tried to depict the PMOI as the perpetrator of the killings.

“I went to Ashraf, I did the body count and went back to Baghdad. Together with the US Ambassador Butler, we went to the Chief of Staff of Al-Maliki, together with his National Security Advisor and Political Advisor plus the Office of Human Rights within the Prime Minister’s Office. I showed them the file and I said to them there are 36 bodies, 36 people killed, and they looked at each other as if I’m fabricating the story. … They didn’t want to see it. 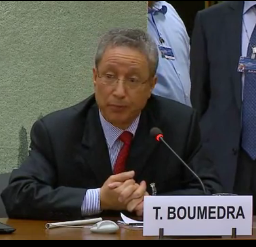 I requested an inquiry; they said to me we will do the inquiry our way. What is their way of inquiry? I sat down with them in the Prime Minister’s office and they showed me a number of grenades pictures and some light weapons, pistols and kalashnikovs. They showed me that picture as evidence that there are weapons in Camp Ashraf and those weapons have been used to kill the Ashrafis themselves. Those pictures, I know that they were not properly done, it was just a picture you could collect from any resource, but never mind. Those pictures were used and distributed to the embassies in Baghdad, together with some statements, those statements were the statements of security forces who were involved in the incident, in the attack and that was the investigation made by of the Government of Iraq.”

Second- Contrary to claims made by Iraqi government and commander of the Diyala Police, the UNAMI representative visited Ashraf at 2 p.m. on September 1, only hours after the perpetration of the crime, observed the bodies and took photographs of them.

“In a statement, U.N. Secretary General said: “The United Nations deplores the tragic events at Camp Ashraf today that have reportedly left 47 killed”.

“Two Iraqi security sources said that army and special forces had opened fire on residents… They said at least 19 were killed, 52 wounded and 38 arrested and that they believed residents were not armed.”

Third- On September 2, a high-ranking UN delegation visited Camp Ashraf and announced in a statement the following day:

“24 hours after the tragic events that took place in Camp Ashraf, a UNAMI delegation led by the Deputy Special Representative of the United Nations Secretary-General (DSRSG), Mr. Gyorgy Busztin, and including UNAMI Chief of Human Rights and of Medical Sections, conducted a visit to the camp yesterday… Inside the camp, the delegation witnessed 52 bodies in a makeshift morgue.
All the deceased appeared to have
suffered gunshot wounds, the majority of them in the head and the upper body, and several with their hands tied…. After UNAMI’s mediation between the Iraqi authorities and the camp’s residents, the latter agreed to allow Iraqi ambulances to transport the bodies of the deceased to the morgue in Baquba”

Fourth- As stated in the NCRI press release (No 65), a delegation of three persons on behalf of Jamil Shemri went to Camp Liberty on September 25 in order to talk with some of the 42 witnesses who were relocated from Ashraf to Liberty to investigate the September 1 attack. Two members of the delegation, Colonel Abdolamir Shemri and Brigadier General Khalis Al-Tamimi, are Jamil Shemri’s deputies, and both were among commanders of the September 1 attack.

Although the residents’ lawyers turned down this illegal investigation, one of the witnesses explained his observations of the scene for 4 and half hours in order to prevent any excuses and accusations of lack of cooperation. But at the end this testimony, the Iraqi delegation refused to even give a copy of the testimony to the witness. The residents’ representatives told the delegation that all the 42 residents were prepared to give testimony in presence of an envoy of the UN or the U.S. embassy as long as a copy of the testimonies were given to the witnesses to prevent their subsequent alteration.

The NCRI press release (No 73) revealed on September 28 that Jamil Shemri’s investigation group was part of a larger scenario one ring of this scenario is to obtain written testimonies, or provide testimonies in person before a government judge, by the murderers that took part in the September 1 massacre. These criminals are individuals that their presence in the camp at the time of the attack is undeniable. This includes individuals such as Major Ahmed Khozeir, Captain Heidar Azab, General Jamil Shemmeri, Colonel Nahad and…

Fifth- Mrs. Maryam Rajavi announced on September 19 at the UN Headquarter in Geneva:

“Hours of video footage taken with mobile phones and cameras of Maliki’s forces and Iranian regime’s agents storming of Ashraf is available. I have personally talked with survivors and witnesses by phone. Iraqi forces confiscated cameras from the hands of those who were executed. We demand the Iraqi government release these mobile phones and cameras that it confiscated from martyrs and wounded persons.”

”Asking the Iraqi government, which committed these atrocities, to perform an impartial investigation and make those results public is absolutely ludicrous. But we do not even have that pretense of objectivity. Prime Minister Maliki simply ignores the requests and accepts weak US and UN responses as a green light to commit further atrocities.”

Seventh- In this respect, on September 1, the US Embassy spokesperson stated in a separate statement:

“ We support UNAMI’s efforts to conduct its own assessment of the situation and call on the Government of Iraq to fully support those efforts… we affirm the call by UNAMI for a full and independent investigation into this terrible and tragic event. Those found to be responsible must be held fully accountable. “

Eighth- EU’s High Representative on Foreign Policy and Security Affairs said in a statement on September 2:

“… The circumstances in which this brutal incident took place must be clarified and those found to be responsible must be held fully accountable… I fully support U NAMI’s decision, under its humanitarian mandate, to conduct an independent and transparent assessment of this tragic event. I call on all parties and particularly the Government of Iraq to facilitate UNAMI’s fact-finding efforts.”

”We support the United Nations Assistance Mission (UNAMI) and its efforts to conduct an independent fact finding investigation of this terrible event and document what happened. . We have called on the Government of Iraq to fully support those efforts”

Tenth- In a letter to the UN Secretary General on September 30, the residents’ representative demanded:

“assume the responsibility for investigation into the massacre and mass execution of September 1 and refuse to allow this great crime against humanity to be forgotten and the principal culprits to escape; hence paving the way for a larger massacre in Camp Liberty.”

“Before this, massacres of July 2009 and April 2011 at Camp Ashraf and rocket barrage of February and June 2013 in Liberty and psychological torture of PMOI in Ashraf for two years and tormenting to death 14 patients remaining without any investigation.

On April 15, 2011, commenting on the April 8 massacre Mrs. Navi Pillay declared: ‘These must be a full, independent and transparent inquiry, and any person found responsible for use of excessive force should be prosecuted.’

However, no steps were taken then until we ended up with greater atrocity and now it appears that the September 1 atrocity would end up with the same fate. Then, we and you should await a still greater atrocity.”

Reiterating the legal logical, and rational principle that a suspect of committing a crime must not participate in conducting the investigation of that crime, the Iranian Resistance once again calls on the UN Secretary General and the High Commissioner for Human Rights to conduct an independent and comprehensive investigation of the September 1 massacre and to bring the perpetrators to justice, and urges them not to allow Maliki and Khamenei to cover up this major crime against humanity, help the master criminals evade, and set the stage for a larger massacre.