The Iranian Regime Continue Their Deception Tactics With JCPOA Negotiations

A Look at Ebrahim Raisi’s Record, Two Months Into His Presidency

The Information and Communication Technology Minister in Hassan Rouhani’s cabinet declared on Monday that the filtering on social networks Facebook and Twitter in Iran will continue and there is not plan to lift them.

Responding to a question by a reporter of ISNA news agency asking “what is the result of review of filtering of the websites such as Facebook and Twitter”, Mahmoud Vaezi said: “there is no plan for removing the filtering on these website, so they will continue to remain on the same state.”

The ICT Minister commenting on membership of some members of Hassan Rouhani’s government in Facebook and twitter said: “ask themselves.”

Later the same day the website of the ministry published a statement and said: “In response to a question by some reporters who had said why, the filtering on Facebook continues despite your remarks indicating that the filtering will be lifted, the minister said I have not said that at all.”

The statement did not deny the report by ISNA state-run news agency. However it said the filtering state of social networks such as Facebook is being reviewed by some working group outside the ministry and the result will be announced. 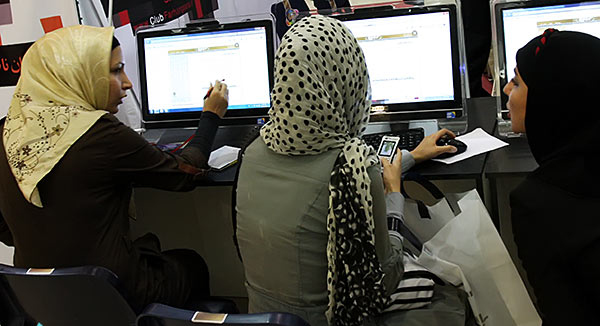 Facebook and other social networking sites are the among the biggest threats to Iran, a regime official has declared.Iraj Mohamad Khani, head of the Cyber Police in the northern province of Gilan, warned that western enemies used the Internet in their ‘soft war’ against the regime, state-run Fars News Agency reported on Monday

He said in a speech at Gilan University: “The virtual world is the most important, the most complex and the most convenient weapon for the enemy to use it in its soft war.

“Those who waste their life by membership in these websites should know that they are creating a sad and miserable future for themselves.”

Meanwhile, the state-run Etemed daily newspaper revealed the existence of an organization named ‘Hezbollah Cyber’, formed during the wave of anti-regime protests in 2009.

The organization had no website, no official registration and no clear identity but defined itself as being ‘an organization composed of big names in cyber activity who support the Supreme Leader’, the report said.