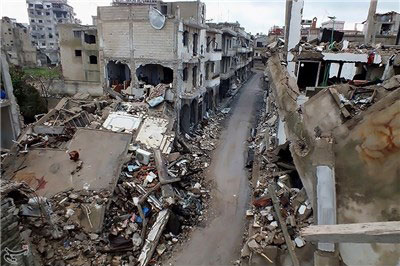 The Britain-based Syrian Observatory for Human Rights said that it has documented 150,344 deaths in the conflict that started in March 2011. The figure includes civilians, rebels, and members of the Syrian military. It also includes militiamen, fighting alongside President Bashar Assad’s forces and foreign fighters battling for Assad’s ouster on the rebels’ side.

The Observatory bases its tally on the information the group receives from a network of informants on the ground inside Syria.

In January, the U.N. said it had stopped updating its own tally of the Syrian dead because it can no longer verify the sources of information that led to its last count of at least 100,000 in late July.

Tuesday’s attack in the northern town of Maaret al-Artiq came in the form of a barrel bombing — bombardment with containers stuffed with explosives rolled out of military helicopters, the Observatory said.

In Turkey, the Syrian’s main opposition bloc said its President, Ahmad al-Jarba, made a rare visit to Syria on Tuesday, meeting with rebels fighting Assad’s troops in the coastal province of Latakia — including the recently captured Christian-Armenian town of Kassab.

Assad’s family hails from Latakia, the scene of a fierce 11-day battle in which rebel groups including the al-Qaida-linked Nusra Front have made significant gains. So far, they’ve captured a border crossing with Turkey and a tiny slice of the coast that gives them access to the Mediterranean Sea.

In addition to Kassab, al-Jarba also toured Latakia’s rebel-held mountainous areas of Jabal al-Turkomen and Jabal al-Akrad, meeting with rebel commanders to assess the “latest plans and needs for the battle on the coast,” the Western-backed Syrian National Coalition said in a statement.

Syria’s uprising began with largely peace protests against Assad’s rule. It has since then evolved into a civil war with sectarian overtones, pitting predominantly Sunni Muslim rebels against Assad’s government that is dominated by Alawites, a sect in Shiite Islam. On the opposition side, Islamic extremists, including foreign fighters and Syrian rebels who have taken up hard-line al-Qaida-style ideologies, have played an increasingly prominent role among fighters, dampening the West’s support for the rebellion to overthrow Assad.

That has led to a backlash by Islamic brigades and more moderate rebels who launched a war against the al-Qaida breakaway group, the Islamic State of Iraq and the Levant. Infighting has raged in the north for months and more than, 3,000 fighters have been killed in the rebel-on-rebel violence since the beginning of the year, according to activists. These deaths were not included in Observatory’s tally.