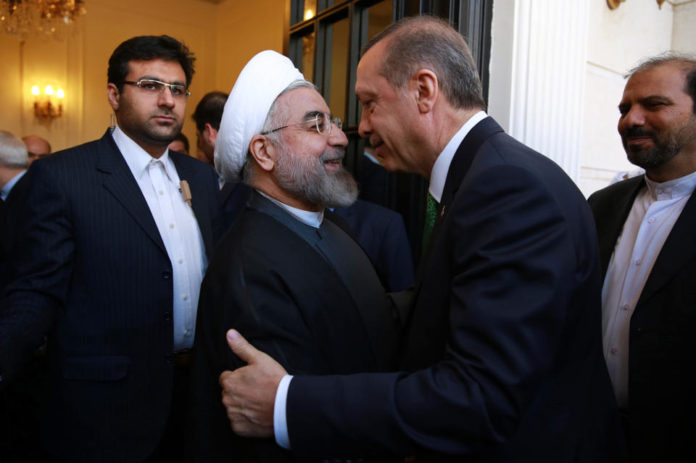 In most recent times, Turkey and Iran have been on opposing sides of nearly all the conflicts in the Middle East. For example, since the very beginning of the civil war in Syria, Turkey wanted, and made great efforts, to force Syrian President Bashar al Assad to step down from power. Iran has done the opposite – it has made great efforts to keep Assad in power and, so far, it has succeeded in this goal. Iran has provided a great deal of help in the form of manpower and training. It has also spent a fortune in this goal. Or rather you could say it has plundered the Iranian people’s wealth on it.
Iran and Turkey are working together in the peace talks in Astana, but this does not mean that one or the other has changed its stance on what it wants to happen in Syria.

Earlier this year, Turkey accused Iran of propagating Persian nationalism in the Middle East. Iran, never one to let an accusation slide, said that Turkey was promoting neo-Ottomanism.

Now, as they work together on the Kurdish referendum issue in Iraq, they have expressed their concerns that the Kurdish populations in each of their countries might start to rise. Although Iran and Turkey have this in common, trust regarding the issue is not there.

Iran thinks that the KRG are going to try to find some sort of compromise with Turkey because of the importance of oil to the Kurds in Iraq. Iran believes that it will allow oil to be exported through the pipeline that runs from Kirkuk to Iskenderun in Turkey.

Kirkuk itself is also a concern to Iran because there is a strong community of Turkmen there and it would be in Turkey’s interests to get the president of the KRG to take it out of the referendum.

These issues bring Turkey and Iraq closer together and Iran fears that it is going to be excluded from the deal.

On the other hand, Turkey worries that Iran’s strong influence in Baghdad will work against Turkish interests. And to make the situation even more worrying, Iran has a good relationship with the Patriotic Union of Kurdistan.

Their shared feelings of apprehension may encourage the two countries to work together and their joint statement rejecting the “illegal and illegitimate referendum held by the Kurdistan Region of Iraq” indicates that talks went well.

During the same short visit, Iran and Turkey held their Turkish-Iranian Supreme Council for Cooperation meeting and several issues were agreed regarding bilateral trade which will increase. They also discussed full implementation of Iranian nuclear deal.

Whether their relationship will stay cordial remains to be seen.