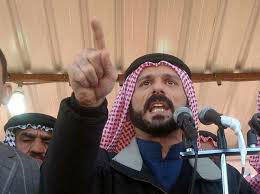 Sheikh Ali Hatem al-Suleimani, the head of the powerful Dulaimi tribe that has been in open revolt against Mr. al-Maliki’s Shia-dominated government since last year, said the West needs to see the Sunni offensive as a broad rebellion by an “oppressed” people, rather than focusing only on the extremists from the Islamic State in Iraq and the Levant (ISIL) that have been the spearhead of the lightning advance towards Baghdad.

He said ISIL – whom he scornfully referred to as “terrorists” – made up just 7 to 10 per cent of the total number of Sunni fighters, and that their role in the uprising had been exaggerated by “social media, Facebook and Twitter.” ISIL has used YouTube and social media accounts to spread often-grisly videos of its advance through the cities of Mosul, Tikrit and Samarra, apparently seeking to both gain new followers and intimidate its opponents.

Sheikh al-Suleimani said that while ISIL and the tribes – along with remnants of Saddam Hussein’s Baath Party regime – shared common cause in wanting to oust Mr. al-Maliki, there was no formal alliance between them. He promised that once Mr. al-Maliki was gone, and the Sunni uprising had achieved its other aims – including a new constitution that would see Iraq made into a federal state, with Sunni, Shiite and Kurdish regions that would have wide autonomy – the tribal fighters would turn their guns on ISIL and defeat them.

“We are postponing our fight with ISIL until later. After Maliki is gone, ISIL will not be a big problem for us,” he said in a meeting with The Globe and Mail and other foreign media at a five-star hotel here in the Kurdish capital. “Now is not the time to fight ISIL, it’s the time to fight Maliki.”

Sheikh al-Suleimani spoke on a day that the Iraqi army launched what appeared to be its largest counter-offensive since the Sunni advance began three weeks ago. Thousands of government soldiers, backed by warplanes, tanks and bomb disposal units, were engaged in what a senior officer said was a “large military operation” to recapture Tikrit, which fell to the insurgents on June 11.

There is precedent for the sheikh’s claim that the tribes are capable of handling ISIL. In 2008, the Dulaimi tribe played a key role in the so-called “Sunni Awakening,” which saw the Sunni tribes – who had originally fought against the U.S. occupation of Iraq – switch sides and attack al-Qaeda in Iraq after they deemed it a larger threat to their interests. The tribes eventually forced al-Qaeda in Iraq out of their base in the western province of Anbar.

The 43-year-old sheikh said the tribes wanted a “democratic” Iraq – with power balanced between Sunnis and Shias – a goal not shared by ISIL, which wants to establish a caliphate ruled by a harsh version of Islamic law. “We know that ISIL don’t believe in the tribes, that they want to use us and work under our cover.”

Sheikh al-Suleimani said Mr. al-Maliki’s government had fostered the rise of ISIL and other hardline groups by “oppressing” the country’s Sunni minority. He asked why Western countries were contemplating military action against ISIL when they had ignored alleged atrocities committed against Sunnis by the Iraqi army, which is mainly Shia.

Although pressure is rising – even within Mr. al-Maliki’s own Shiite community – for the prime minister to step aside and allow the formation of a new government of national unity, he has thus far refused, branding the push an attempted coup d’état.

Sheikh al-Suleimani said the Sunni offensive would continue all the way to Baghdad – which has a mixed population of Sunnis and Shias – if Mr. al-Maliki did not resign.

“Maliki says Baghdad is a red line. There are no red lines for the rebels, the tribes,” he said, with four mobile phones, two packages of cigarettes and a Diet Pepsi arrayed on the table in front of him. “To avoid a battle for Baghdad, we have to have Maliki out of power.”

He acknowledged there was a possibility the fighting could forever split Iraq. “Dividing Iraq is better than us being killed every day.”