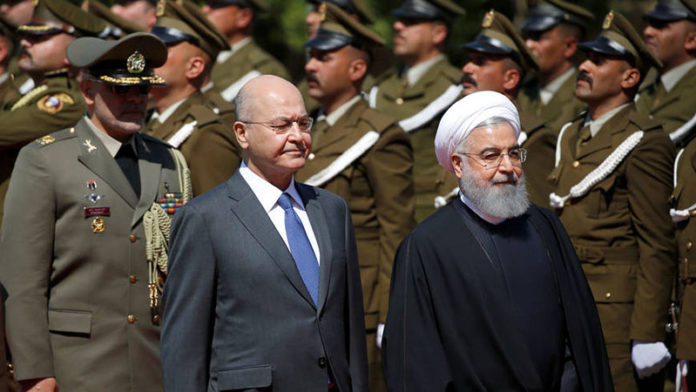 The discussions were also characterized by anti-American rhetoric that underscores the escalating tensions between Iran and the US at a time when the Iranian regime is working to expand its influence throughout the surrounding region.

Overall media coverage of Rouhani’s trip suggests that the Iranian president was particularly direct in voicing contempt for the US government, while his Iraqi counterpart was somewhat more nuanced. In the first place, Reuters quoted Rouhani as saying that the US is “hated in the region” and that its history as an “occupying country” means its relations with Iraq cannot be compared with those of the Islamic Republic of Iran. However, it is debatable whether Iran can truly escape the same label as an “occupier” in the wake of its direct contribution to conflicts within Iraqi territory.

Although Iranian forces and their local proxies have been credited with helping to effectively destroy the Islamic State of Iraq and the Levant, they have also seemingly secured a permanent foothold in the affected countries. In recent months Iranian officials and the Iranian Revolutionary Guard Corps have specifically signaled that they do not intend to remove forces from the surrounding region, much less halt support for Shiite militant groups that continue to operate alongside neighbors’ regular armed forces. And while this situation has been openly accepted by some Iraqi politicians and citizens, others have been pushing for the ouster of Iranian influence as a means of reclaiming Iraq’s autonomy.

In covering the conflict between Iran and the US over access to Iraqi markets, Al Jazeera noted that local populations in places like the Iraqi city of Basra have attacked Iranian consular buildings and the offices of Iran-backed militant groups. The outlet’s video report showed masked youths addressing the camera during one clash and decrying the Iranian regime’s self-serving policies in Iraq. And while such displays showcase an overall divide within Iraqi society, they also reflect a similar split within the political establishment of a country that appears simultaneously dependent on the support it receives from Iran and the US.

This situation was specifically acknowledged by Iraqi President Barham Salih against the backdrop of his meeting with Rouhani. Voice of America News quoted him as saying that Iraq has historically been a “battleground for conflicts between regional and international powers.” Although this remark skirted the edge of endorsement for Rouhani’s distinctly anti-American commentary, Salih did not go as far as specifically choosing a side on that battleground. Instead, he praised the concept of regional cooperation but arguably left the door open for continued cooperation between the Iraqi government and that of the US as well.

The trouble with Salih’s fence-sitting position is that it depends upon the US and Iran either resolving their own growing tensions or working around them while simultaneously pursuing policies that support each of their relations with Iraq. This may be a tall order, given the nature of the responses to Rouhani’s trip by both the officials and the national media on both sides of the political conflict between the Islamic Republic and the United States. For instance, on Tuesday, Iran’s Foreign Ministry spokesman Bahram Qassemi reasserted Tehran’s defiance of US influence in its pursuit of relations with Iraq, saying that the Iranian regime would not “seek permission” from any foreign actor.

In carrying Qassemi’s remarks, the Islamic Republic News Agency asserted that he had spoken specifically in response to “interventionist comments” by Brain Hook, the US State Department’s special representative for Iran. “The anger of this American official is not surprising,” Qassemi said, adding that Tehran considered an era of US meddling in the affairs of regional countries to be coming to an end.

Assuming that that is Tehran’s sincerely held belief, it is presumably connected to the regime’s expectations regarding the future of the Iranian oil trade in the wake of last year’s American withdrawal from the 2015 Iran nuclear deal. Although that withdrawal spurred the re-imposition of economic sanctions on various Iranian industries and on importers of Iranian petroleum, eight of the top such importers were subsequently granted temporary waivers by the White House. Among these were Iraq, which depends on Iran for a major portion of its electricity generation needs.

The Washington Free Beacon reported upon this situation on Monday and declared that “Iranian leaders are betting on the Trump administration to cave in on a key piece of its tough new sanctions aimed at choking off the Islamic Republic’s access to lucrative crude oil markets.” The initial round of waivers lasted for six months after the re-imposition of secondary sanctions and are scheduled to end in May, but some or all of them could be extended for a further six months or longer.

By doing so, the White House would be cutting against its promise of “maximum pressure” on the Iranian regime, but it bears noting that this was also true of the first round of waivers. These were put into effect in order to prevent a spike in global oil prices, although President Trump had previously indicated that he did not intend to issue waivers. The administration now appears hopeful that the reality of the situation will be more conducive to maximum pressure, with other oil suppliers being capable of offsetting the loss of Iranian sources. Yet Reuters continues to report that waiver extensions are likely for China and India, at least.

Iraq remains a more open question, and the administration’s decision may ultimately depend upon political calculations as well as an assessment of the technical viability of wholly cutting off Iraq from Iranian products. Al Jazeera suggests that this is a major fear among Iraqis, and thus a potential source of backlash. But the Free Beacon reports that US officials are holding meetings with all relevant countries, wherein they can be expected to try to assuage those concerns while presenting strategic plans for how Iraq and other energy importers can hope to weather the loss of Iranian markets.

The Free Beacon also quoted one American foreign policy expert as saying that a conclusion must emerge from these discussions quickly. “The longer the State Department leads the world to believe more waivers are coming,” he said, “the harder it will be to enforce maximum pressure on Iran.” On the other hand, a quick decision does not resolve the further problem that the US will need buy-in from other stakeholders in order to make such maximum pressure viable. This is something that Secretary of State Mike Pompeo is reportedly working to address at the moment, through discussions with foreign officials and major players in the private sector.

According to Reuters, Pompeo met on Tuesday with executives from some of the world’s top energy companies, then proceeded to address the oil and gas industry’s largest conference in the United States. In so doing, he sought to promote support for White House policies that include the broader isolation of the Islamic Republic of Iran. Separately, Pompeo was also expected to participate in a closed door meeting regarding the prospective formation of a Middle East Strategic Alliance, through which the US and a number of Gulf Arab nations intend to collectively act to address Iran’s malign regional activities and contain Iranian regional influence.

Why Does the Iranian Regime Fear US-Iraq Talks?