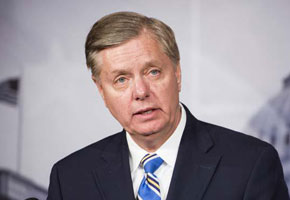 The South Carolina Republican, who just returned from a visit to the Middle East, said: “the Arabs told me, and the Israelis told me, that if you do a nuclear deal with Iran like we’re proposing – which is a North Korea in the making – then you’re going to have a nuclear arms race in the Middle East.”

Graham also said: “The Saudi Arabians told us in no uncertain terms that they will not sit on the sidelines and watch Iran get a nuclear capability without matching it – and that they are very disappointed in American leadership.”

Meanwhile Sen. Bob Menendez (D-N.J.), ranking member of the Senate Foreign Relations Committee, is considering delaying the introduction of his Iran sanctions bill until March, which would give him more time to gather support from Democrats, according to a recent interview.

The bill, co-authored with Sen. Mark Kirk (R-Ill.), would impose new sanctions if international negotiators do not reach a deal with the Iranian regime to roll back its nuclear program by the June 30 deadline, with a waiver if a deal is close.

“If sanctions aren’t in place, his only options will be a military option, or to accept a nuclear-armed Iran,” Menendez told The Star-Ledger. “By having sanctions in place, you have a third way.”