Home News Terrorism The IRGC and its Regional Terrorist Network 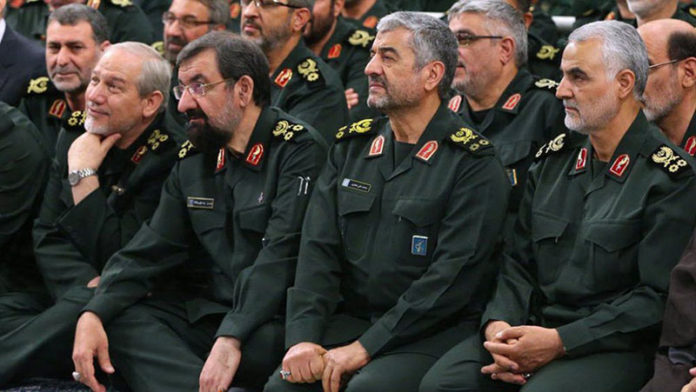 The IRGC continues to threaten the Gulf region until today. The Commander-in-Chief of the Revolutionary Guards said that the militias had armed 200,000 young people in Syria, Iraq, Afghanistan, Pakistan and Yemen.

Iranian President Hassan Rouhani in fact said that his government had failed because of the presence of another government led by the Revolutionary Guards, with all the economic strength, media influence and weapons to impose its authority on the opposition.

The US decision angered Iran’ regional agents, led by the Lebanese Hezbollah militia leader Hassan Nasrallah, as it was a severe blow to the support they have been receiving from the Revolutionary Guards’ proxies.

To force them to change their regional behaviour, abandon their hostile policies and destabilizing expansionist plans, the decision aims to uncover the financial links between the Revolutionary Guards and its agents and to exert maximum pressure on the Iranian mullahs.

The Trump administration does not seem inclined to use hard power in pursuing US foreign policy objectives. But it does use soft power strategies in hard ways that are equally, if not more effective.

Trump has always focused his threats on the economic front. Let us not forget his famous threat to destroy the Turkish economy.

Trump makes good use his experience and mindset of a businessman who knows the strengths and weaknesses of economies. So, the use of the weapon of sanctions is different this time.

It is not about conventional sanctions, but about hitting the backbone of the economy by cutting lines of communication between a state and the global economy.

Sanctions lead to difficult economic isolation, the impact of which is often stronger and more serious than that of military strikes.

Dictatorships use foreign military strikes as a pretext to mobilize people and create a narrative around false claims such as resistance to foreign intervention and the fight against aggression. Slogans distract from and perpetuate the suffering of the people caused by failed development and spending resources on foreign adventures. The mullahs’ regime has been chanting the same slogans since the 1979 Khomeini revolution.

Though the decision to include the Revolutionary Guards on the terrorist lists remains an American one, the NATO allies across the Atlantic share a common vision of the Iranian regime. The two sides differ merely on tactical terms.

The EU has imposed sanctions on over 80 Iranian entities and individuals in protest against serious human rights violations in the country. The UK recently banned the Lebanese Hezbollah in the country.

Europe is more interested in containing the danger of the mullahs’ regime while maintaining open channels of dialogue hoping that the regime will change its agressive policy some day.

Nevertheless, the easy way has failed over the past few decades. The calm strategy sends the wrong message to the mullahs’ regime, allowing it to carry on with their predatory politics.

The hard way will expose and dismantle regional terrorist networks led by the Iranian mullahs. With the US sanctions imposed on the Iranian oil sector, which will ban the export of Iranian oil as of May in order to block the financing of terrorist activities carried out by the Revolutionary Guards, the mullahs will be facing an uncertain fate in the near future.

Sanctions will inevitably lead to the breakdown of the regime that is fragile and based on a alliance of ideological interests. It would not have been possible to combat terrorist activities without putting an end to this tyrannical regime that claims to be fighting terrorism, even though it is one of its most notorious sponsors.