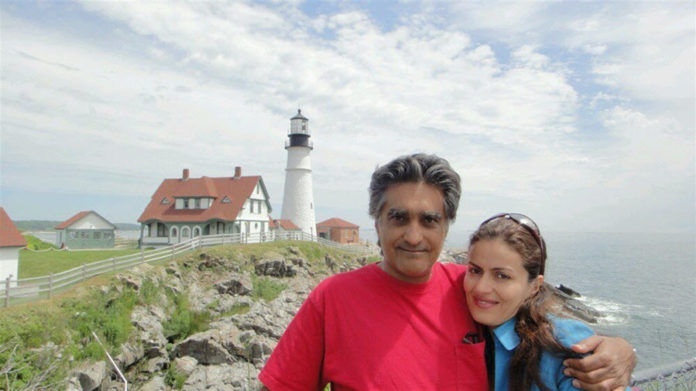 The principal charge against Vafadari was apparently “collusion in plots against national security,” although his letter alleges that the Iranian Revolutionary Guard Corps had sought more serious charges by putting pressure on Neyssari to make false statements against her husband. Specifically, the authorities reportedly attempted to portray Vafadari as a member of Mossad or the CIA, as part of an effort to secure a death sentence in his case.

Vafadari further alleges that his lengthy prison sentence was largely the result of the IRGC’s exertion of pressure on the judiciary. The IRGC and the Iranian Ministry of Intelligence have been widely credited with an escalating crackdown on dual nationals and other perceived threats to Iran’s ideological purity. Accordingly, CHRI notes that at least 30 dual nationals have been arrested since the conclusion of nuclear negotiations between Iran and six world powers in the summer of 2015. Many of the highest profile cases involve charges for which no evidence has been made publicly known, and in some cases the defendants were not informed of specific charges against them.

“Given the IRGC’s influence over the judiciary and their determination to completely ruin our lives, I don’t think we will be justly treated unless there is greater and more effective international pressure. The simple reason is that they want to make an example of us or add us to their list of hostages,” Vafadari’s letter declared.

The question of international pressure over Vafadari and other dual nationals was presented in new light on Thursday amidst reports that the White House may have secretly reached out to Iran for discussion of a possible prisoner swap. Such a move would be an apparent departure from President Donald Trump’s markedly hardline posture toward the Islamic Republic, especially given his severe criticism of his predecessor over the prisoner swap and so-called ransom payment that secured the release of four Americans in January 2016.

In any event, reports from sources including the New York Post indicated that Iran had rebuffed the recent outreach amidst an escalating war of words between the two countries. In addition, those reports followed closely behind the announcement that Baquer Namazi, another Iranian-American hostage, had been returned to Evin Prison after a brief leave, against the recommendations of medical professionals.

The 81-year-old father of fellow prisoner and Iranian-American businessman Siamak Namazi was transferred to hospital to receive specialized treatment last month after he experienced a drastic decline in blood pressure and an erratic heartbeat. A previous such transfer had resulted in the installation of a pacemaker. However, both these and two other instances of specialized medical treatment were granted only after the elderly detainee’s health conditions steadily worsened over periods of weeks.

In the most recent instance, his post-treatment medical leave was initially limited to only four days before being extended through Sunday. On Tuesday he was summoned to immediately return to prison and resume his 10-year sentence for the vague charge of cooperation with hostile countries. The Associated Press reported that Iran’s own medical examiner had recommended that Namazi be granted a minimum of three months’ leave. His family and attorney maintain that his failing health means a return to prison at this stage would constitute a de facto death sentence.

The US State Department responded favorably to the initial reports of Namazi’s medical leave but also cautioned that such temporary measures were inadequate. The department’s statement went on to urge the immediate and permanent release of Namazi and all other wrongfully detained Americans. But it remains unclear whether such demands are in fact being backed up by the sort of “international pressure” that Vafadari sees as being necessary to fair treatment in such cases.

However, various international human rights organizations are making recognizable efforts to keep up some sort of pressure on the Islamic Republic not only over the plight of dual nationals but also over a range of recurring human rights abuses, some of which have been given added publicity through their relationship to the aforementioned cases. The denial of medical treatment to Baquer Namazi is typical of a pressure tactic that is used against numerous political prisoners, and the attempt to elicit forced confessions from Neyssari are also repeated on a regular basis with political detainees and their families.

Arbitrary pressures and the denial of medical treatment are both features of a situation that was highlighted on Wednesday by the renowned human rights advocacy group Amnesty International. That report calls attention to the violent transfer of female political prisoners Atena Daemi and Golrokh Ebrahimi that took place on January 24. Following physical and verbal assaults, the two women were moved to “appalling conditions” in Shahr-e Rey Prison, in violation of Iranian laws that call for the separation of prisoners according to category of crime.

Both women promptly initiated hunger strikes in protest of their illegal transfer. They were joined on January 27 by Ebrahimi’s husband and fellow political prisoner Arash Sadeghi.

reviously, in October 2016, Sadeghi protested his wife’s arrest and detention by initiating a hunger strike that lasted for more than two months and inspired large-scale street protests but only resulted in officials agreeing to grant Ebrahimi conditional release while reviewing her case. The Amnesty report indicates that Sadeghi is still suffering from the effects of that hunger strike but has been consistently denied medical treatment in the face of worsening ailments of the kidneys, heart, respiratory, and digestive systems.

Ebrahimi and Daemi now face a risk of worsening health conditions as well, regardless of whether they persist in their own hunger strikes. Amnesty describes Shahr-e Rey Prison as “a disused chicken farm that holds several hundred women convicted of violent offences in overcrowded and unhygienic conditions, without access to safe drinkable water, decent food, medicine and fresh air.”

Far from being imprisoned for violent crimes, Daemi and Ebrahimi are both serving sentences stemming from peaceful activism and private communication. Ebrahimi’s three-year sentence relates to security forces’ discovery, during a raid on her home, of an unpublished, fictional story describing one woman’s outrage at witnessing another woman being stoned to death. Daemi is serving a seven-year sentence stemming primarily from social media posts she made in protest of Iran’s abuse of the death penalty.

In addition to consistently having the highest per-capita rate of executions in the world, the Islamic Republic also persists in various practices related to the death penalty that have been explicitly banned in international law. Prominent among these is the practice of sentencing juvenile offenders to death, and this is also the subject of vigorous international activism including a recent urgent call to action by Amnesty International.

The relevant statement, issued on Thursday, notes that 21-year-old Abdolfazi Naderi is at imminent risk of execution for a crime he allegedly committed at the age of 16. Iran is a signatory to two international human rights conventions that outlaw the death penalty for persons who were under the age of 18 at the time of their offenses. This aside, Naderi maintains his personal innocence, stating that he went to the police to report a friend’s suicide but was subsequently convicted of murder based on a false confession that was extracted under torture and later withdrawn.

As well as calling for a letter writing campaign related to Naderi’s particular case, the Amnesty document highlights Tehran’s persistent disregard for international condemnations of the practice of juvenile executions. Specifically, it notes that at least 88 such executions have been carried out since 2005, with four having taken place in 2017 and three having already been carried out this year.

Human Rights Watch also called attention to these statistics in a report that detailed the cases of the three youthful offenders who were hanged in January. The report points out that one of these, Amirhossein Pourjafar, had shown clear signs of mental illness but had been put to death anyway, thus demonstrating the judiciary’s lack of interest in applying new legal standards that allow for Iranian judges to hand down lesser sentences when there is evidence that the defendant lacked mental maturity or failed to comprehend the crime or its consequences at the time of its commission.

Another report, by Iran Human Rights, focused exclusively on the case of Mahboubeh Mofidi, who was executed on January 30 for allegedly killing her husband when she was 17. The details of her case cast doubt upon the extent of her culpability for a crime that involved participation from her brother-in-law, who received a sentence of 20 years in prison. But it also called renewed attention to the persistent problem of underage marriage in Iran, considering that the murder took place four years after Mofidi was married to an older man, at the age of only 13.

This in turn shines a spotlight on the state of women’s rights in the Islamic Republic, and that general topic is one in which the clerical regime has faced considerable recent pressure not just from international human rights defenders but also from domestic activists. For instance, following the first such protest on December 27, Iranian authorities arrested at least 30 women for publicly removing their hijabs in silent demonstrations that are extensions of the White Wednesday and My Stealthy Freedom protests against forced veiling.

According to CHRI, one of those arrestees, Narges Hosseini, recently refused to appear in court, where she was to be given an opportunity to “repent” for her supposed crimes of “committing a sinful act,” “violating public prudency,” and “encouraging immorality or prostitution.” If convicted, she could face up to 10 years in prison, as well as being ordered to receive 74 lashes. And in light of the pressure being exerted on the judiciary by the IRGC and other hardline institutions, her conviction seems likely unless a resurgence of recent popular protests, an increase in “effective international pressure,” or both of these factors overcome the impulse toward defending the clerical regime’s ideological purity.