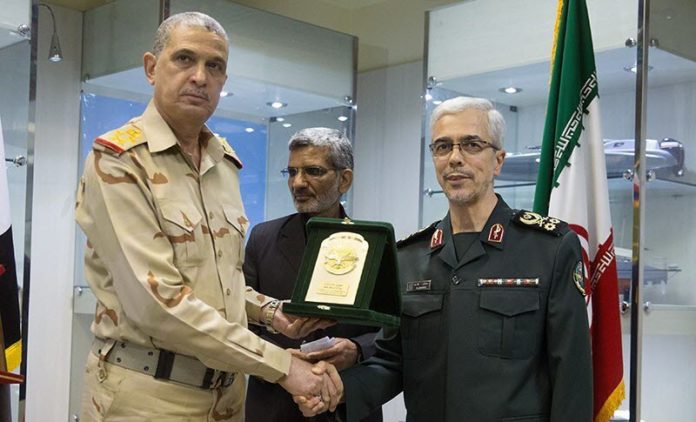 The Reuters report made note of the trilateral developments taking place alongside the Iraqi delegations visit. Following the referendum vote, Turkey has reportedly carried out joint military drills with both Iraq and Iran, on the borders of the Kurdistan region, which spans parts of all three countries. Al Jazeera adds that Tehran has vowed to stand by Turkey in its confrontational response to the referendum. The Iranian military has also reportedly installed missile batteries near the Kurdish region. This, however, is nothing new, as there are periodic reports of violent clashes between Iranian armed forces and Kurdish separatist groups.

Still, Iran’s new escalation of these tensions may be intended to reinforce the regime’s message to Turkey, which has separately threatened sanctions that could potentially cut off the flow of upwards of 70 percent of the goods that Turkish Kurdistan relies upon. In addition to helping back this threat up militarily, Iran could somewhat mitigate the negative effects of Turkey ending economic transactions with the oil-rich Kurdish region.

Subsequent to the 2015 nuclear deal with six world powers, Tehran has already used its newly expanded oil supplies and revenue streams to expand its influence in the region. Particularly notable is the diplomatic crisis between Qatar and some of its Gulf Arab neighbors, which was evidently sparked by a lack of Qatari commitment to the Saudi Arabian-led strategy for opposing the expansion of Iranian regional influence. Subsequent to Saudi Arabia, the United Arab Emirates, Egypt, and Bahrain cutting off political and trade ties with the nation of Qatar, the Iranians took the opportunity to deepen that influence by sending food supplies and giving Qatar further incentive to stand by its position favoring reconciliation with the Islamic Republic.

That situation goes to show that the boundary lines of regional conflicts are apparently in flux, and Iranian-Turkish relations are arguably evidence of the same. This was the feature of an article that appeared in the Christian Science Monitor on Tuesday and questioned the extent to which Turkey – a longstanding NATO ally – is strategically pivoting toward Iran and, by extension, Russia.

The article notes that the issue of Kurdish separatism, as well as drawing Turkey and Iran closer together, is also driving a further wedge between Turkey and the US. As Syrian rebel groups began to deteriorate that had been supported by both the US and Turkey, American policy surrounding that country’s civil war began to focus on arming and supporting a Kurdish fighting force, instead. This shifted Turkey’s priorities away from pushing for the removal of Syrian dictator Bashar al-Assad and toward constraining the growth of Kurdish power, which the Turks feared could fuel the separatist movement.

Furthermore, the CS Monitor article points out that the government of Turkish President Recep Tayyip Erdogan is upset that the US withdrew an arms deal with Erdogan’s presidential security detail after 15 members were indicted for assaulting protestors during a visit to Washington in May. This has helped to fuel the growth of anti-Americanism, pushing Turkey to turn east, for instance by pursuing an agreement to purchase the advanced S-400 missile defense system from Russia.

The article notes that that deal could still falter, and regarding the general Turkish shift, it argues that the recent actions may be purely tactical and thus short-lived, because Ankara’s interests diverge sharply from those of Tehran and Moscow. It bears noting, however, that much the same argument was made by numerous analysts about the past two years of growth in military and political cooperation between Iran and Russia.

Since Russia became involved in the Syrian Civil War, it was speculated that Moscow could be persuaded to rein in or act against its Iranian allies, because the Russians had less incentive to support the Assad regime, provided that they could keep their military bases in Syria. But whether because of firmer-than-realized Iranian-Russian commitments or because of lack of relevant strategy from the US and its partners, these supposedly divergent interests never fully manifested, and Russia continued to support Iranian activities in Syria throughout the height of the war. Both nations are now working together to establish and enforce ceasefire agreements, along with former local adversary, Turkey.

There is little doubt that the United States still sees great incentive to try to exploit divergent interests between Iran and both Turkey and Russia. Indeed, this may be necessary in order to curtail the growth of Iranian influence there, while the US also tries to reassert its influence in places like Iraq. The Iranian regime is reportedly striving to use recaptured areas of Syria as links in a chain leading from Tehran to Damascus and to Lebanon, where the Iran-backed paramilitary Hezbollah is based.

On the other hand, an article that was published in the Washington Post on Wednesday suggested that Iran may already be entrenched in Syria, where the Syrian armed forces are increasingly organized under the Iranian Revolutionary Guard Corps and a planned US-led buildup of coalition forces did not come to fruition in the strategically important region of Deir el-Zour. The article points to these factors in order to criticize the Donald Trump presidency for an apparent lack of established policy in Syria, but it also conveys National Security Advisor HR McMaster’s observation that “the Assad-Iranian-Russian push into southeast Syria” is “hugely problematic in the long term” and must be addressed.

But pending a coordinated, strategic response from the US and its allies, it seems clear that the Islamic Republic of Iran will continue to bolster its own presence in Syria and to use this as a focus of propaganda as it pursues a broader sphere of influence in the Middle East as a whole. The propaganda element of this situation was made clear once again in an International Business Times report that described a gathering that took place on Wednesday to commemorate Mohsen Hojaji, an IRGC soldier who was beheaded by Islamic State militants in Syria in August.

The ceremony was attended by Supreme Leader Ali Khamenei himself, who described Hojaji as a “dear martyr” and an example of “numerous young people” who are willing to fight and die on behalf of the Iranian theocracy’s vision for Islam and the Middle East region.

While this sort of propaganda serves the general purpose of boasting of Iranian influence, it also comes in the midst of other propaganda that is clearly aimed at presenting that influence specifically as a bulwark against Western influence in the same region. The ceremony came just days after Tehran falsely claimed to have tested a newly developed ballistic missile capable of traveling more than 1,200 miles. The missile was also put on public display in Tehran as part of Defense Week, which ostensibly commemorates the 1980-88 Iran-Iraq War but also serves as an outlet for hardliners’ anti-American rhetoric.

On Wednesday, Newsweek reported that Tehran further expanded upon the missile claims by saying that the country’s armed forces were planning to construct nuclear submarines and a new, advance naval destroyer. The report also notes that these threats come in the midst of increased tensions between Iran and the US. For the White House, at least, those tensions remain focused on the 2015 nuclear agreement, as evidenced by President Trump’s speech to the United Nations General Assembly last week. But that speech also made clear reference to Iran’s overall contribution to regional instability, suggesting an American commitment to curtailing Iranian influence in Syria, Iraq, and elsewhere.