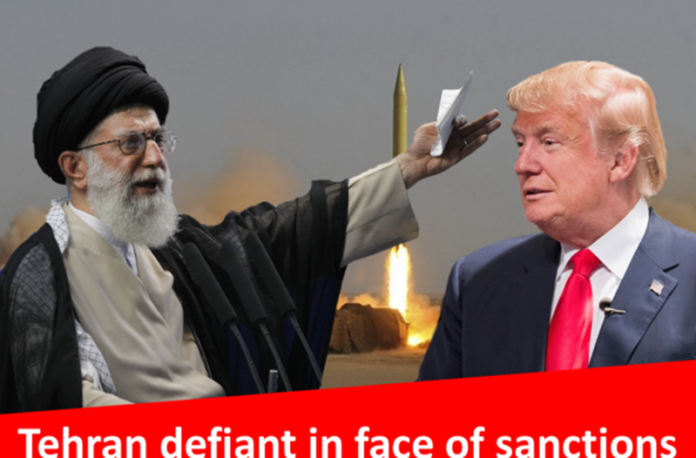 US President Donald Trump decided in May to withdraw from the 2015 Iran nuclear agreement negotiated by his predecessor in partnership with five other world powers. Secretary of State Mike Pompeo subsequently declared that Iran would soon face the “strongest sanctions in history” as part of an effort to compel Tehran not only to abandon its nuclear weapons ambitions but also to halt its support of terrorism and its intervention into regional affairs such as the Syrian Civil War. Previously suspended secondary sanctions on entities that do business with Iran are set to come back into full effect in November. The Trump administration has also implemented a number of new sanctions, many of them targeting the Iranian Revolutionary Guard Corps.

Reuters noted that Iran has previously attempted to use the ICJ to forestall sanctions and shift some of the weight of international pressure off itself and onto the United States. A previous suit was filed in 2016 and hearings are scheduled for October of this year. But the latest reporting gives little indication of how seriously either case is likely to be taken.

either does it include expressions of Iran’s own expectations regarding the outcome.

What is known is that the Islamic Republic has requested a provisional ruling that would halt the implementation of sanctions pending proceedings in the newly filed case. This suggests that the regime’s main intention may not be to secure an ultimate ruling in its own favor but rather to minimize the short-term effects of sanctions to the greatest extent possible, thereby giving itself more time to prepare for the effects of their full re-implementation.

The Reuters report also pointed out on Tuesday that the ICJ has no mechanisms for enforcing its rulings, meaning that even if a judgment were handed down against the US, it could simply be ignored. Tehran is no doubt aware of this, and thus is aware of the fact that the main effects of the case would only be in the realm of public relations. But this may be significant in and of itself, to the extent that it inspires hardliners to view the regime as standing up to Western powers while also giving would-be trading partners at least a small measure of additional justification for defying US sanctions.

This effect could be significant at a time when countries that are caught in the middle of the Iran-US conflict are uncertain about the extent of the American enforcement they may face in the months ahead. On Sunday, UPI reported that the US Treasury had rejected broad requests for sanctions waivers from European Union member states, which are still trying to preserve the 2015 nuclear deal in absence of American participation. The response to that request from Treasury Secretary Steven Mnuchin emphasized the administration’s commitment to maximizing pressure on the Islamic Republic.

That commitment was reiterated on Monday by Secretary of State Pompeo, according to the Washington Post, but this was done in the context of the administration’s acknowledgment that it might grant waivers to certain countries that are seemingly dependent on Iranian trade, provide that they undertake meaningful reductions of that trade. While this does indeed maintain the assertive White House approach to this area of foreign policy, it also contradicts former statements that were uncompromising on the topic of waivers. On one hand, the administration may be reacting to the economic reality faced by some relatively vulnerable countries; but on the other hand it may be hedging against the possible effects on global oil prices if Iranian oil is cut off completely. In any event, the effect is the same for those countries that might reasonably strive to maintain some of their economic relations with Iran.

Nevertheless, the Iran’s economic prospects may not be very much improved by the White House’s failure to completely isolate the Iranian oil supply. Even following the latest signs of compromise from the administration, Reuters reported that Iranian oil exports could fall by two-thirds before the end of the year as a result of the stepped-up pressure from the US.

And even as European governments search for a way to keep the nuclear deal in effect, many European businesses have recognized the practical necessity of abandoning it instead of courting the danger of falling afoul of that pressure.

The European Council on Foreign Affairs recently highlighted this situation in a commentary piece regarding Europe’s “last push” to save the Joint Comprehensive Plan of Action. The article noted that various companies’ withdrawal from Iranian markets had been facilitated in part by the disunity of European governments on the topic of how far they are willing to go to in confronting the US for the sake of keeping the deal alive.

This situation is almost certain to remain in place, or even to shift toward consensus on going along with the US, as the Europeans confront more signs of persistent Iranian belligerence and malign behavior. The ECFA commentary notes that some of these signs have come directly from the administration of Iranian President Hassan Rouhani, who has long been regarded as a moderate by some Western officials. In recent visits to Austria and Switzerland, he has threatened to walk away from the JCPOA unless Europe provides Tehran with highly substantial guarantees of later outcomes. Rouhani and others have also pointed out that walking away from the deal could entail quickly and dramatically ramping up nuclear enrichment levels.

Coincidentally, Rouhani’s visit to Austria came soon after it was revealed that an Iranian diplomat stationed there had been arrested by German authorities in June, on suspicion of masterminding a plot to detonate explosives at a gathering of Iranian opposition activists and their international supporters in Paris. This is arguably one of the most salient examples of persistent Iranian misbehavior, which may underscore the additional risks of violating US sanctions for the sake of maintaining the status quo in European-Iranian relations.

The Paris terror plot does not stand alone, but joins other such incidents as a March plot targeting the same Iranian opposition group, the People’s Mojahedin Organization of Iran, in Albania. Additionally, in recent years, German authorities have reported upon numerous incidences of Iranian agents trying to evade sanctions for the procurement of technology with military applications including the potential development of weapons of mass destruction. The Tower recalled attention to these efforts on Monday, pointing out that 32 such procurement efforts had been identified in 2017 and that others were still being reported as recently as last month.

Although the ongoing exposure of these and other activities promises to strengthen the US government’s commitment to a hardline policy while also encouraging participation from European authorities, the Iranians are still making every effort to evoke a tone of confidence. On Tuesday, Iranian.com quoted Foreign Ministry spokesman Bahram Qassemi as saying that it is more likely that the US will call Tehran to negotiate a new deal than, as opposed to Tehran calling the Trump administration after succumbing to pressure.