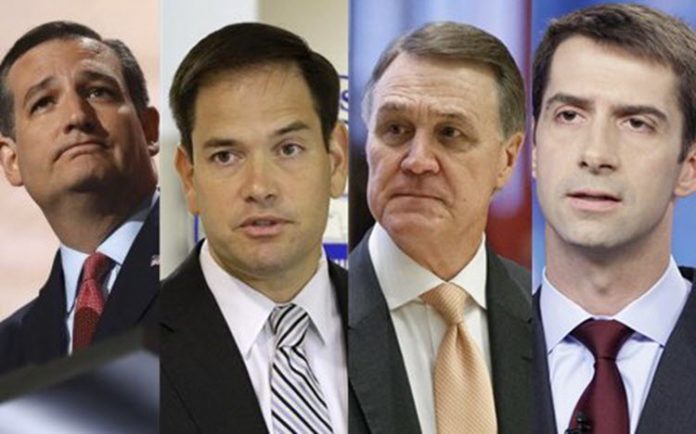 As the Washington Examiner pointed out, the letter signed by Senators Tom Cotton, David Perdue, Ted Cruz, and Marco Rubio drew attention to two simultaneous problems: the persistent doubts about Iran’s commitment to its own requirements, and the notion that even if it lives up to its bargain the deal will have an adverse effect on regional and global stability.

In the first place, the doubts relate in large part to Iran’s refusal to grant international inspectors access to the country’s nuclear research and military sites. And these doubts are exacerbated by recent threats from the likes of Ali Akbar Salehi, the head of the Atomic Energy Organization of Iran, claiming that the Islamic Republic is prepared to resume nuclear enrichment at a higher level than it had been maintaining prior to the implementation of the JCPOA. This, of course, suggests that the country has been continuing work on enrichment technologies in secret and in violation of the terms of the agreement.

In the second place, the letter emphasized: “Even if we put aside issues related to Iran’s violations of the [nuclear deal], the full suspension of U.S. sanctions falls far short of being ‘vital to the national security interests of the United States,’ as required by [federal law],” they wrote. “In fact, a continuation of current policy would be tantamount to rewarding Iran’s belligerence.”

That belligerence has been evident in a number of Iranian behaviors, some of them directly specifically against the United States and some of them simply adverse to Western interests in Syria, Iraq, and the rest of the Middle East. And as an editorial at Voice of America pointed out on Wednesday, some of these behaviors were addressed in recent United Nations discussions regarding the enforcement of Security Council Resolution 2231.

Coinciding with the implementation of the JCPOA, that resolution governs the enforcement of the agreement and also makes mention of issues that were left out of the agreement, including Iran’s work on potential delivery systems for a nuclear warhead. The resolution warns Tehran against further development and testing of ballistic missiles and other nuclear-capable weapons, and yet the Iranian regime has blatantly disregarded that provision, carrying out several ballistic missile tests since the conclusion of nuclear negotiations.

What’s more, last month Iran utilized ballistic missiles in its first missile strike on foreign territory in 30 years. While this was supposedly directed against Islamic State militants in eastern Syria, it was also cited by one general in the Iranian Revolutionary Guard Corps (IRGC) as a message of strength directed at Iranian adversaries, particularly the United States and Saudi Arabia.

Jeffrey Feltman, the UN Undersecretary General for Political Affairs, called attention to these illicit launches when he presented the findings of the Secretary General’s report on the implementation of Resolution 2231. He also highlighted other facts that were indicative of Iranian non-compliance, including the seizure of arms shipments bound out of Iran last year and the interference of Iranian forces in Iraqi affairs, some of it directed by IRGC Quds Force commander Qassem Suleimani, who is banned from travel to UN states as a result of his record of support for international terrorism.

The VOA editorial also reiterates that US Ambassador to the UN Nikki Haley has insisted that the Secretary General’s report “is filled with devastating evidence of the nature of the Iranian regime.” Haley’s remarks, not the first of their kind, are one aspect of an ongoing effort by the Trump administration to focus international attention upon Iranian malfeasance and to encourage consensus on a policy of more extensive economic and diplomatic pressure on the Islamic Republic.

These efforts no doubt contribute to hope among Senator Cotton and his colleagues that the Secretary of State and the White House as a whole will respond favorably to their urging for the effective cancellation of the JCPOA. Indeed, while the Washington Examiner acknowledges that the Trump administration certified Iran’s compliance the first time it was required to do so, Mr. Tillerson also suggested that this might be a temporary measure as the White House conducted a complete evaluation of the JCPOA. The president is required to submit evidence of Iran’s compliance to Congress every 90 days, and the absence of such evidence would supposedly trigger near-immediate re-implementation of the congressional sanctions suspended under the nuclear deal.

At the same time that some lawmakers are pushing for the White House to pull this trigger, others are focusing their efforts on increasing sanctions on the Islamic Republic in other areas, not directly related to the nuclear agreement. Prominent among these are sanctions on individuals and entities with ties to the Iranian ballistic missile program, some of whom have already been newly sanctioned upon presidential authority.

The Countering Iran’s Destabilizing Activities Act is currently pending in Congress and aspires to sanction the Islamic Republic’s ballistic missile activities and also extend all anti-terrorism sanctions to the IRGC, in line with President Trump’s former recommendation that the hardline paramilitary be designated as a foreign terrorist organization. The bill initially passed the Senate by the staggering margin of 98-2, indicating the extent of popularity for measures aimed at restricting the activities of the Iranian regime. But it subsequently stalled on procedural grounds in the House of Representatives. According to Reuters, an identical bill has now been introduced by the House Foreign Affairs Committee, on the expectation that this will resolve those procedural issues and allow the sanctions to quickly go into effect.

Meanwhile, some legislators and other government officials are also keeping up efforts to pressure Tehran over still other matters, unrelated either to the JCPOA or to Resolution 2231. For instance, the Sun-Sentinel reported that Florida Democratic Senator Bill Nelson had spearheaded a letter urging President Trump to “re-engage with Iran” over the disappearance ten years ago of former FBI agent Robert Levinson, who was evidently detained and taken to an undisclosed location by Iranian officials when he was on Kish Island as part of a private endeavor for the CIA.

Levinson’s disappearance has been cited as an example of a pattern of hostage-taking of US citizens, utilized for political ends by the Iranian regime. Furthermore, this pattern has also been described as continuing unabated in the aftermath of the JCPOA negotiations. American businessman Siamak Namazi and his father Baquer Namazi, as well as IT professional Nizar Zakka and San Francisco graduate student Robin Shahini are all examples of persons who have been arrested while visiting Iran, with the primary basis for their arrests apparently being their connections to the US.

The continuation of these arrests contradicts promises by Iranian President Hassan Rouhani that under his administration Iranian expatriates would be able to return to their home country without fear of reprisal. In a larger sense, it also contradicts the expectation advanced by the previous American presidential administration that the Rouhani presidency and subsequent JCPOA negotiations would lead the way to moderation in Tehran’s behavior.