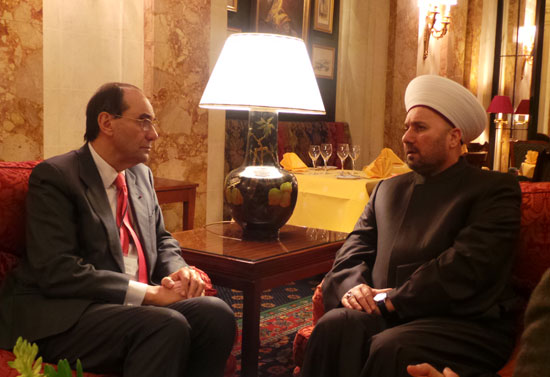 Dr al-Refaei thanked the Vice-President for his support and explained the crimes against humanity committed by the Iraqi Government, especially the mass executions, and said: “Maliki is able to commit such crimes with the backing of the Iranian regime and it is really the Iranian Quds force which is ruling Iraq.” Dr al-Refaei added: “Although the Sunnis are the target of a brutal ethnic cleansing, the Iraqi people as a whole including the Shias, Christians and other minorities are being severely repressed.” The Grand Mufti of Iraq said “It is a Divine law and an ethical obligation to safeguard the safety and security of Iranian opposition PMOI members in Iraq. Any abuse which results to their suffering would strike a blow to our humanity. “ Mr Vidal-Quadras thanked Dr al-Refaei for his support for the Iranian refugees in Iraq and said that treatment of refugees is a serious benchmark for democracy.