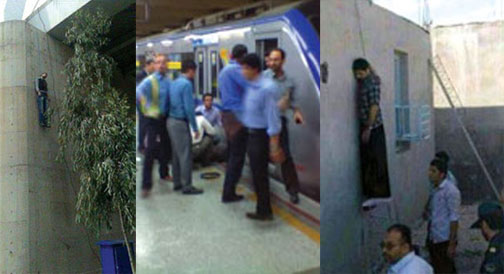 On January 21, a middle-aged woman set herself ablaze in front of a security forces station in the city of Mobarakeh in Isfahan. This suffering mother whose efforts to free her innocent son had gotten nowhere, poured gasoline on herself and ignited it in protest to the arrest and torture of her son. On January 21, a young street vendor committed suicide by throwing himself under a train in protest to the confiscation of his petty merchandise by Tehran’s municipal agents. His body was gruesomely cut in half under the wheels of a train. This shocking incident happened in the Golbarg Station of Tehran’s underground metro after the regime’s agents who are accustomed to extorting and plundering the property of the toilers, confiscated the goods of this deprived young man that was only worth less than three dollars and was his only means to support his family. He had told the agents that if they do not return his petty merchandise he would throw himself under the train, but the agents paid no heed to his request. On January 26, Khossrow Haidarian, the fired laborer of Fouland Mobarakeh and a local of Najafabad of Isfahan, jumped off from the fifth floor of an unfinished apartment building in protest to unemployment and poverty and lost his life. Before he committed suicide, he threw one hundred copies of a letter he had written from the top of the building where he had written: “Everyone should know that the great ruler of this country is responsible for my death. Despite working 14 hours a day, I cannot pay my debts.” On February 1, a young woman of 29 from Andimeshk in Khuzestan Province which is one of the principle oil-rich provinces in the country, set herself ablaze and ended her wretched life after her husband was fired from the factory. She left behind a seven year old daughter. On February 2, a 35-year old man from the town of Kangan in Bushehr Province hanged himself in his home. His suicide raised much abhorrence among the people. On February 3, a man called Hossein in city of Ilam set himself ablaze out of the pressures of poverty. He was married and had three children. On February 5, the news and the shocking picture of the suicide of a deprived young man in Ahvaz was disseminated on a large scale. Also, on February 6, a 27-year old man by the name of Arash Pashaei who was in Unit 4 of the Ghezel Hessar Prison hanged himself ending nine years of imprisonment in a life that was full of suffering. The Iranian people are fighting off these hardships while hundreds of billions of dollars of their wealth is being wasted by the mullahs’ regime in the ominous nuclear project, the export of terrorism and a transgressing warmongering in the countries of the region such as Syria, Iraq, Yemen and Bahrain, or usurped in astronomical embezzlements and sent to the bank accounts of the mullahs and their likes and affiliates. This is a catastrophic situation that the supporters of the appeasement-policy knowingly close their eyes to in order to advocate the illusion of “moderation” regarding the criminal Mullah Rouhani and thereby participate in lengthening the life of mullahs’ created hell and the oppression and the miserable life of the Iranian people. Secretariat of the National Council of Resistance of Iran February 18, 2014