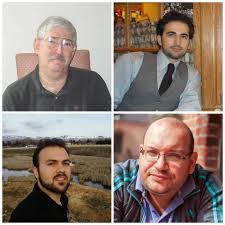 Rezaian’s judiciary-approved lawyer, Leila Ahsan, has less than 20 days to appeal the decision, but even she has apparently been kept in the dark about precisely which charges her client has been convicted on, as well as what sentence he is facing. It had previously been reported that his charges of espionage, collaboration with hostile governments, and spreading propaganda would carry a sentence of between 10 and 20 years.

There is no indication that any significant figures in the Iranian regime or its independent judiciary are receptive to the ongoing calls for Rezaian’s conviction to be directly overturned. Even officials of the Rouhani administration, regarded as relatively moderate by some Western leaders, have not spoken out on his case.

When pressed on the issue by the Obama administration in the midst of nuclear negotiations over the summer, Iranian Foreign Minister Mohammad Javad Zarif referred to the journalist as a friend but said only that he hoped his case would be resolved quickly. Zarif justified Rezaian’s detention and reiterated a familiar regime talking point that Iranian prisoners are nobody’s business but Tehran’s. Rezaian and two other Iranian prisoners hold joint citizenship in the US and Iran, but Tehran says it does not recognize dual citizenship.

However, a report by the Daily Beast on Friday pointed to the regime’s possible double standard regarding prisoners in Iran and in the US. In recent weeks there has been much talk about the possibility of a prisoner exchange, swapping Rezaian and the two others for 19 Iranian nationals being held in American jails as a result of their violations of economic sanctions that are due to be lifted under the July 14 nuclear deal.

The Daily Beast investigated the identities of Iranian nationals convicted in the US for nuclear-related sanctions and found that some of them hold both Iranian and American citizenship. By pushing for their release, Tehran implies either that it does recognize such dual citizenship when the given individuals are subject to US authority or that it thinks that persons living with full rights in the US are nonetheless citizens only of Iran.

In any event, the possibility of a prisoner swap was raised by President Rouhani himself, although the prospect for such a swap was subsequently made to seem more unlikely when Supreme Leader Ali Khamenei barred his subordinates from any further negotiations with the United States. Nonetheless, Zarif and US Secretary of State John Kerry have reportedly continued to communicate with each other, and the Obama administration insists that it has continued to raise the issue of the captive Americans at every opportunity.

Furthermore, the Daily Beast suggests that some elements of the Iranian judiciary may still be open to the idea of a prisoner swap and that this is why they have recalled attention to the fact that Rezaian’s conviction is not yet final but is subject to appeal. So while authorities are unlikely to vacate the conviction outright, they may be holding back details of that conviction while waiting to determine whether they will have an opportunity to release him in exchange for Iranian sanctions violators.

This has given rise to a still-emerging debate in the West over whether such a swap would actually be in service to US interests. The Daily Beast article addressed both sides, noting that some policy analysts believe the swap would be a “small price to pay” for safeguarding American citizens while others think that it would set a bad precedent, which could encourage more Iranian misbehavior over the long term.

Only two of the prospective subjects of the exchange are serving US sentences over six years, and none have been convicted of violent crimes. Some even claim to have violated the economic sanctions unknowingly, via a complex series of business dealings. But David Albright and Andrea Stricker of the Institute for Science and International Security feel that it does not matter how minor the crimes were, since the release of these prisoners would still send the message the hostage-taking of American citizens can work to secure Iranian goals.

Indeed, in decoupling the fate of the three Americans from the nuclear negotiations, the Obama administration argued that not doing so could give Iran the impression that it could secure better terms in future negotiations by using Americans as bargaining chips. Still, many of Obama’s critics felt that he should have set the release of the three hostages as a precondition for any agreement.

Other critics feel that despite its talking point on this particular issue, the Obama administration had already sent the message that hostage-taking could be an effective strategy. The Daily Beast notes that the Obama administration responded positively to a 2009 memo from Tehran identifying four prisoners the Rouhani administration wanted released. These dealings eventually led to the release of a convicted arms smuggler and three others from US and UK custody. This purported show of good faith reportedly helped to bring Iran to the nuclear negotiating table in the first place.

And now that Iran is apparently employing the same strategy in pushing for the early release of the 19 Iranians, it may also be setting the stage for more of the same. That is, IranWire this week pointed to what may be another hostage-taking of an American citizen, in the form of the arrest of an as yet unnamed Iranian-American businessman. So while the prisoner exchange that is currently being considered may be a small price to pay for the freedom of three American citizens, the debate will surely rage on as to whether there would be additional consequences to the overall leverage enjoyed by Tehran over Washington.