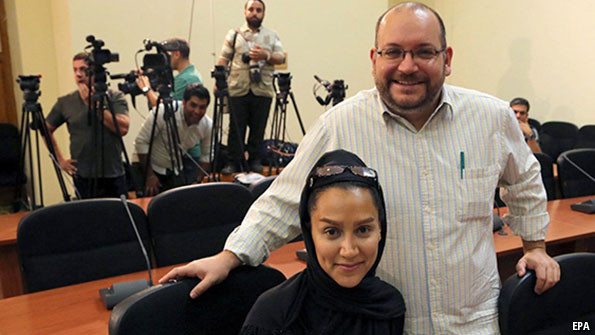 After weeks of being detained in isolation with no facts made known about their case, there are finally some developments in the story of Jason Rezaian and Yegabeh Salehi, the husband and wife journalists who were arrested in July as part of an apparent Iranian crackdown on both domestic and foreign media.

While the whereabouts of the couple remains unknown, some details of the accusations against them have apparently been leaked to the press. Although the judiciary remains mum on the topic, state-affiliated news outlets have levied accusations of espionage against Rezaian, and have declared him guilty in absence of evidence. Some of these commentaries call for his deportation and some call for him to face the death penalty.

Some of these reports in Rezaian’s case also attempt to link him to a previous case that went unprosecuted – the arrest of six youths who starred in the “Happy in Iran” YouTube video, in which they danced to a popular American song. There is no evidence of a direct link between the two cases, but Rezaian is blamed for contributing to the early popularity of the video, before it came to the attention of the regime authorities.

Iran does not recognize dual citizenship. Deputy Foreign Minister Hassan Ghashghavi in a statement told the United States that Rezaian’s case is purely a matter for Iranian law. “We do not allow other countries to demand consular rights on behalf of Iranians,” he explained in comments carried by Reuters. He pointed out that Iran does not recognize Rezaian’s American citizenship.