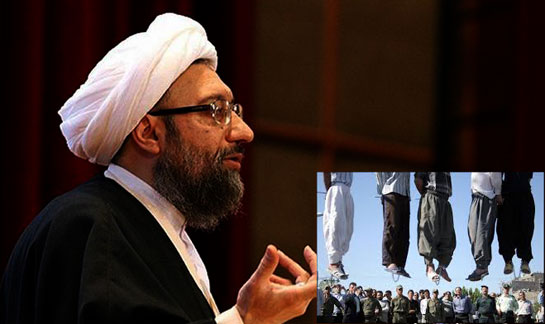 “The inspections conducted in Evin Prison have been lawful and ordinary in the Prisons Organization. According to the report of the prison’s respectable head, no offense has been committed. Nevertheless, foreign media continue with their lies and in collaboration with some internal media are looking to revive the sedition current. Where in the world do they offer such facilities to prisoners? The police forces in Western countries treat the demonstrators and prisoners in the worst fashion.”

The Head of the Judiciary went on to threaten the prisoners, informing them that from this point onward they will only be treated worse:

“All should know that the Islamic system in Iran is not a regime to turn passive in the face of seditionists for imaginary excuses and if so far it has shown some leniency to the prisoners, it will no longer be lenient.”

According to reports from relatives of prisoners, political prisoner Gholamreza Khossravi, an inmate in Ward 350 of Evin Prison, was attacked by the revolutionary guards and security agents from the outset. They broke his glasses on his face and his right ear was badly cut. He is now staging a hunger strike to protest his conditions. He is no longer allowed to communicate with the outside world.

Hossein Ronaghi Maleki, who had been suffering from renal infection before this raid, sustained serious injuries in his limbs from the beating he took, and his renal problem has since worsened.

Javad (Abolghassem) Fouladvand and Majid Assadi are also in critical condition and in solitary confinement. These two prisoners have deep wounds and broken bones in the head and upper limbs as well as deep bruises all over their bodies. Prison officials say that they are going to hold them incommunicado for three weeks.

Another prisoner, Samko Khelqati had his hand broken. Behnam Ebrahimzadeh, Akbar Amini, Mohammad Sadiq Kaboudvand and Yashar Darolshafa have been left without treatment despite their serious injuries from these beatings. Among these victims, only Mohammad Sadiq Kaboudvand has been treated in the prison’s infirmary. There is no news on Omid Behrouzi, and Esmaeil Barzegari is still tied to his infirmary bed with a chain.

So far, 35 prisoners have gone on a hunger strike in protest to this situation. They made the following statement:

“While expressing our support and solidarity with other strikers, we shall continue with our hunger strike until the return of our cellmates to the ward and until their complaints have been looked into.”