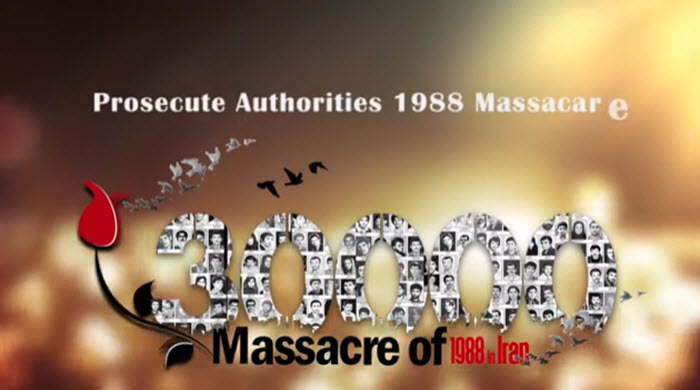 Dr. Rafizadeh goes on to give some background, “Born in Esfahan, Iran, Ayatollah Hossein Ali Montazeri was one of the founding fathers of the Islamic Republic, a human rights activist, Islamic theologian and the designated successor to the Regime’s Supreme Leader Ayatollah Khomeini, until the very last moments of Khomeini’s life. His pictures were posted next to Khomeini’s in the streets.  Many believed that he could have stayed silent, acquiesced, and followed the agenda of the ruling leaders – including Khomeini, Rafsanjani, Khamenei, and the senior cadre of IRGC – in order to receive the highest religious and political position in the Islamic Republic.”

However, Montazeri felt that he did “not have a response on the Day of Judgment”, and that he felt that it as his duty to speak up and “warn Imam [Rouh Allah Khomeini].”  With that, Montazeri’s fate was sealed. Right before Khomeini’s death, Montazeri was replaced by a junior cleric Ali Khamenei.

“He always felt compelled to speak up; he thought the Islamic Republic had significantly diverted from the ideals of the revolution, he believed religion was intervening in the political affairs of the state, the image of Islam was being tarnished by the Islamic Republic, and he thought people should be given more power over the government.” says Dr. Rafizadeh.

“One of the core tensions between Montazeri and the ruling elite was his criticism that the government’s policy is violating the inalienable rights of the people and restricting their freedom,” according to Dr. Rafizadeh, “The surfacing of this audio by Montazri has shed light on underlying pillars of the Islamic Republic in consolidating its power and governing.”

In response to the enormous mass executions in 1988, Montazri said, “I am a straight-talking person. I don’t hold back what is in my heart. In contrast to some gentlemen who do what is politically expedient…Believe me, I haven’t been able to sleep and this issue (executions) occupies my mind 2-3 hours every night … how will you respond to the families? How much Shah executed? Compare our executions to his!”  When asked for his permission to execute 200 people, he retorted, “I don’t give permission at all. I am even against a single person being executed.”

Many members of those who were executed were from the opposition group, MEK which is led currently by the National Council of Resistance of Iran (NCRI) President-elect, Maryam Rajavi. Amnesty International estimates that in the summer of 1988, the overall number of people executed were 4,500. Some estimates reach as high as over 30,000 people. Many of them belonged to the  (PMOI / MEK).

Montazeri points to the un-Islamic, illegal and unjust elements of these executions which also included executions of children and pregnant women.“In Esfahan, a pregnant woman was among them [those massacred]. In Esfahan they executed a pregnant woman…. [In clerical jurisprudence] one must not execute a woman even if she is a mohareb (enemy of God). I reminded [Khomeini] of this, but he said they must be executed. In the month of Moharram, at least in the month of Moharram, the month of God and the Prophet, it shouldn’t be like this. At least feel some shame before Imam Hussein. Cutting off all meetings and suddenly engaging in such butchery, dragging them out and Bang! Bang!!! Does this happen anywhere in the world? …”

Montzaeri argued that opposition should not be addressed by executions but by challenging their ideology.

.  “Executing them without (their having committed) any new activities brings into question all prior judges and judgments. How do you justify executing someone who was sentenced to something less than execution? Now we have cut off all meetings and telephone calls. But tomorrow what answer can we give to their families? … Ultimately, the Mujahedin-e Khalq are not simply individuals. They represent an ideology and a school of thought. They represent a line of logic. One must respond to the wrong logic by presenting the right logic. One cannot resolve this through killing; killing will only propagate and spread it”.

Dr. Rafizadeh, says, “The government could not eliminate Montazri the way it did with other opposition leaders due to his religious authority and the large number of followers he had. He was put under house arrest and his speeches and activities were heavily controlled.”

He continues, “Ironically, all those people to whom Montazri is addressing and warning in the audio, all of those who were involved in these crimes, appear to enjoy high positions currently. Mostafa Pourmohammadi was a representative of the intelligence ministry to the notorious Evin prison, and he was recently appointed by the so-called moderate president Hassan Rowhani to be justice minister. Ebrahim Raeisi was a public prosecutor and is currently the head of Astan Quds Razavi, which has billions of dollars in revenues…. What is crucial to point out is that realistically speaking, these people are only few of those who would be involved in such large scale crimes against humanity. They have been awarded higher positions, power, and money.”

Poignantly, Montazeri tells the ruling politicians, “Beware of 50 years from now, when people will pass judgment on the leader (Khomeini) and will say he was a bloodthirsty, brutal and murderous leader…. I do not want history to remember him like that…”

Dr. Rafizadeh, concludes, “Finally, it is incumbent on the human rights organizations, the United Nations, and the International Criminal Court (ICC) to conduct rigorous investigations and bring those who have committed and continue to commit these crimes – and more likely who currently serve in high positions in Iran – to justice. Calls to bring these people to justice are increasing.”