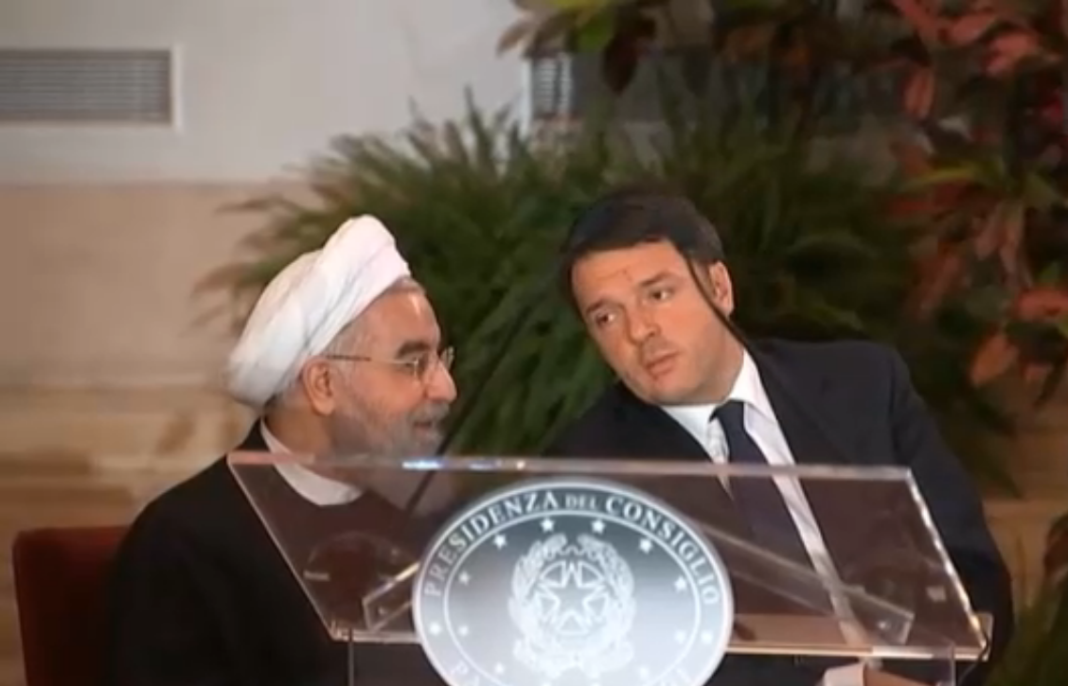 This figure apparently reflects last-minute increases in the quantity and total value of business deals. A separate Reuters report points out, for instance, that Rouhani’s trip was preceded on Sunday by Tehran’s first major business gathering in the new post-sanctions era, which has resulted from this month’s implementation of the July 14 nuclear deal.

The meeting focused on the sale of European aircraft to Iran, in the interest of modernizing a commercial airline industry that had been virtually crippled by economic sanctions. The Reuters report indicates that the volume of deals rose of the course of that meeting to include 160 planes with a total list-price of 20 billion dollars, though Iran is expected to pay less than this due to the age of some of the production lines.

European delegates to the meeting indicated that Iran was moving faster than they had expected to bring these deals to life. Meanwhile, the start of Rouhani’s state visits suggests that Iranian officials and businesses are receiving very significant support and inducements from Europe to foster this speedy implementation.

This latter factor was illustrated on Monday when The Hill reported that Florida Republican Representative Dennis Ross announced plans to introduce legislation formally rebuking the Obama administration for its plans to allegedly violate new rules barring citizens of and recent visitors to Iran from receiving visa waivers from the State Department.

The administration has informed Iran that these restrictions can be circumvented by utilizing the relevant legislation’s provisions for exceptions on the basis of national security. Despite objections from several members of Congress who say that this is not the intent of such waiver provisions, President Obama plans to utilize them to allow some “legitimate business travelers” to enter the US without visas.

Ross’s plans for a formal rebuke not only criticized this allege overreach of executive power; it also highlighted the extent of congressional skepticism regarding how Iran might manipulate the ongoing change in US-Iran relations. That is, Ross accused the Obama administration of “placating to Iran’s deceptive intentions.”

Such skepticism has helped to keep alive the possibility that the US might re-implement economic sanctions in response to Iranian misbehavior. And this has in turn made it comparatively difficult for American businesses, as well as some European businesses that have regular interactions with the US, to resume their relations with the Islamic Republic.

Despite this fact, the intense interest in the Iranian market among other Western entities is making it increasingly difficult for US companies to maintain their present, cautious policies. The Reuters report on the European aircraft sales points out that Boeing was not in attendance at the Tehran meeting, but also suggests that the deals that were struck there were likely to give Boeing incentive to enter the market in order to avoid losing more ground to its competitors.

Critics of the nuclear agreement have long worried that this would be the effect of the lifting of sanctions, and that the new climate of competition for Iranian business would make it difficult to convince the international community to accede to sanctions once again, if the US determined this to be necessary.

What’s more, there is significant doubt as to whether the Obama administration would be willing to declare that such a move is necessary. Both in the West and among US allies in the Middle East, critics have frequently expressed concern that the nuclear agreement was indicative of a pivot toward Iran in US foreign policy.

The administration has attempted to dispel this notion, most recently by sending Secretary of State John Kerry to Riyadh over the weekend, where he insisted that the US would remain vigilant about Iran’s destabilizing activities in the region. But at the same time, the Associated Press indicates that Kerry reportedly attempted to maintain a neutral position with regard to Saudi-Iran proxy conflicts in Yemen and Syria, urging the Saudis to accept an Iranian role in formulating a negotiated solution.

Such positions are a hard sell in the wake of this month’s breakdown in relations between the two Middle Eastern powers, following Iranian attacks on the Saudi embassy and consulate in Tehran and Mashhad. Additionally, Western critics remain averse to the administration’s rapprochement efforts in part because they do not appear to be generating reciprocation from the Iranian regime.

The Los Angeles Times once again highlighted this fact on Monday, in an editorial that pointed to several ways in which Supreme Leader Ali Khamenei and his allies are resisting the normalization of relations with the West in order to preserve Iran’s “revolutionary self-image.” The article concluded by suggesting that challenge for the US in the coming months and years would be not to transform relations between the two countries, but rather to manage ongoing conflict with Iran, without resorting to war.

Many commentators on the current situation have emphasized that the lifting of sanctions and the rush to invest in the Iranian market could make persistent conflict more likely by empowering the regime’s hardline infrastructure, including the Iranian Revolutionary Guard Corps and the various businesses in which it has a controlling interest. This danger was highlighted anew on Monday in a report by the Japan Times, which reiterated that Western entities will inevitably be doing business with IRGC, even if indirectly.

At the same time that the IRGC maintains control over about half of the Iranian economy, its officials have left little doubt about how they will utilize an influx of new capital. The Japan Times points out that a number of them have recently reaffirmed their commitment to foreign conflicts including the fight to defend Syrian dictator Bashar al-Assad and the support for Houthi rebels fighting against the Western-backed government in Yemen.

Although Rouhani’s visit to Europe is focused on economic prospects, these IRGC statements undermine the few political issues that have emerged from the host countries in advance of his arrival. The Associated Press reported on Monday that Italian Prime Minister Matteo Renzi had told reporters, “If we reached a nuclear deal, we can reach a deal on Syria.” He also expressed the view that Iran can now “play a fundamental role in the stability” of the Middle East.

But many political groups have disputed this notion, pointing to the IRGC’s influence and public statements as evidence. In France, a number of groups including the Paris-based National Council of Resistance of Iran began a week of campaigns and protests on Sunday, insisting that the embrace of Rouhani’s government will only lead to more instability in the region.