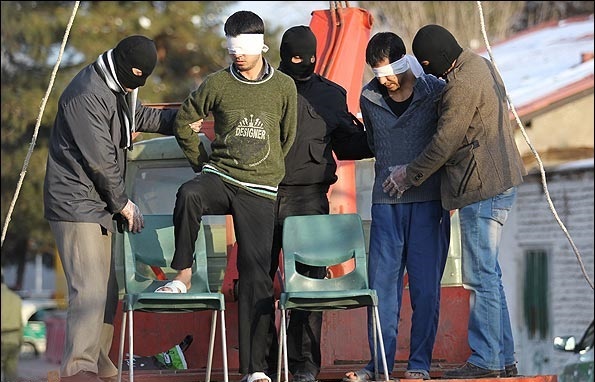 On December 9, the prison guards at Gohardasht prison in the city of Karaj violently raided the Section 6 of the prison. Under the pretext of carrying out an inspection, the guards sent some 1000 prisoner out in the cold in the priosn yard without them having proper clothing.

Wednesday marked the 20th day of a hunger strike by 29 Kurdish political prisoners being held in Orumiyeh Central Prison in northwest Iran. These individuals have been protesting to bring attention to their treatment, including the recent relocation of their fellow political prisoners to wards housing violent criminals. The protesters charge that this policy by prison guards is aimed at making them subject to additional psychological and physical abuse, coming not only from the guards themselves but also from similarly anti-Kurdish inmates.

On the occasion of Human Rights Day, there were various new indicators of an ongoing human rights crisis in Iran. The well-known human rights lawyer Nasrin Sotoudeh was arrested on Wednesday and held for several hours along with her husband, before both were released. The couple was on their way to the 50th day of an ongoing sit-in in front of the Bar Association office in Tehran in protest of the suspension of her license to practice law.

The arrest was apparently motivated by an effort to interrupt the protest, which was to be attended on this day by Sotoudeh’s supporters, at her request. In spite of her detention, some 80 people reportedly participated in the sit-in on her behalf. Sotoudeh’s short term detention is reminiscent of a similar incident last week in which animal rights activist Ali Tabarzadi was arrested the day before a planned rally, and released the day following.

Tabarzadi has focused much of his recent activism on opposing legislation that would punish dog-walking with large fines and flogging, on the basis of it being a sign of Western cultural influence. The Associated Press made mention of this legislation in an article on Wednesday describing a unique dog shelter outside of Tehran, which provides some respite for the typical mistreatment of dogs throughout the country. The article points out that city workers routinely shoot dogs dead in the streets.

The AP adds that the Vafa Animal Shelter has steered clear of the debate over the anti-dog walking legislation – a likely sign that its owners realize that opposition to the legislation could be met with reprisals, if only in the form of the arrests directed at Tabarzadi and other animal rights or human rights activists.

Iran’s Ministry of Culture and Islamic Guidance has made clear that certain types of music are not welcoming in Iran, and that it would not under any circumstances grant permits for rap concerts. Ministry spokesman Hossein Nooshabadi explained that rap encourages bad behavior and could harm the nation’s Islamic society.

Iran has had a fraught history with music, at times banning all styles other than traditional Persian song. Although these restrictions have eased somewhat, the Culture Ministry continues to exert control over which modes of expression are permitted, and many musicians have been forced to emigrate under threat from the government.

Of course, the threat to these individuals can theoretically be mitigated by alteration of their activities. But this is less the case for individuals who are persecuted of disenfranchised by the Iranian government merely because of their ethnicity or affiliations. The Daily Beast on Wednesday reported on the condition of some representatives of one such group on the occasion of Human Rights Day.

Amidst all of the above reminders of repression and human rights abuse in Iran, there is one tentative piece of good news. The Iranian Supreme Court has called into question a lower court’s sentencing of Omid Kokabee, a nuclear physics graduate student who was reportedly sentenced to ten years in prison for “contact with enemy states” following his refusal to work on an Iranian weapons program.

Kokabee has already been held in Evin Prison for over three years. The Supreme Court’s review of his case explained that Kokabee cannot be said to have been in contact with an enemy state because “presently no country is in a state of hostility towards Iran, and political differences with other states do not constitute hostility.”

The case will now be sent to a lateral court for retrial, but it is by no means a foregone conclusion that the Supreme Court ruling will lead to Kokabee’s freedom. Many other political cases have been sent for review only to result in reconviction or conviction on another charge. In a recent example, Reyhaneh Jabbari was hanged last month for the stabbing death of a man who was allegedly trying to rape her. Her original sentence was delayed for review and subsequently delayed again amidst mounting international pressure, but her execution ultimately went ahead nonetheless.