Rajavi said that various human rights indicators including the rate of executions, the status of women in society, and the treatment of minorities have only gotten worse under the presidency of Hassan Rouhani, who was embraced as a moderate by much of the world after elections in the summer of 2013. Human rights groups and much of the reformist population of Iran have demonstrated agreement with Rajavi’s assessment, noting that while Rouhani has opened up negotiations with the West, he has broken most of his domestic campaign promises including those related to human rights.

Rajavi condemned the conduct of some Western governments that sacrifice human rights in Iran for their relations with the religious dictatorship and said: “Look at the bitter outcomes of European delegations’ visits to Tehran in the past year. The mullahs used each and every one of them to increase executions.” 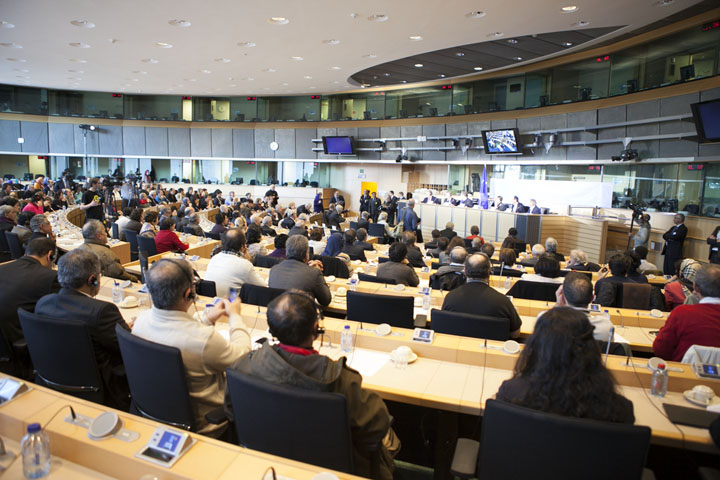 Mrs. Rajavi said that in order to stop Iranian regime from obtaining a nuclear bomb, the West needs to show resolve.  She scolded the Western countries for offering unwarranted concessions to the ayatollahs in the talks and for remaining silent regarding the tragedy of domestic suppression in Iran.

“The nuclear talks with the mullahs in the past year continued in parallel with the rise in executions in Iran,” she said. “To ensure the success of the talks, Europe and the United States not only remained silent vis-à-vis the human rights tragedy in Iran; they also offered further unjustified concessions to the regime. Despite all these, the negotiations failed and left the world living in fear of a barbaric fundamentalist regime obtaining a nuclear bomb.”

According to Rajavi, “This regime has no capacity to accept a deal which would guarantee abandoning the nuclear bomb. The regime is facing an impasse. It wants to end the international sanctions but at the same time it fears the consequences of abandoning its means of survival…The mullahs agreed to negotiate due to mounting pressure. They stalled on signing an agreement due to concessions. The only way forward is more pressure and more sanctions.”