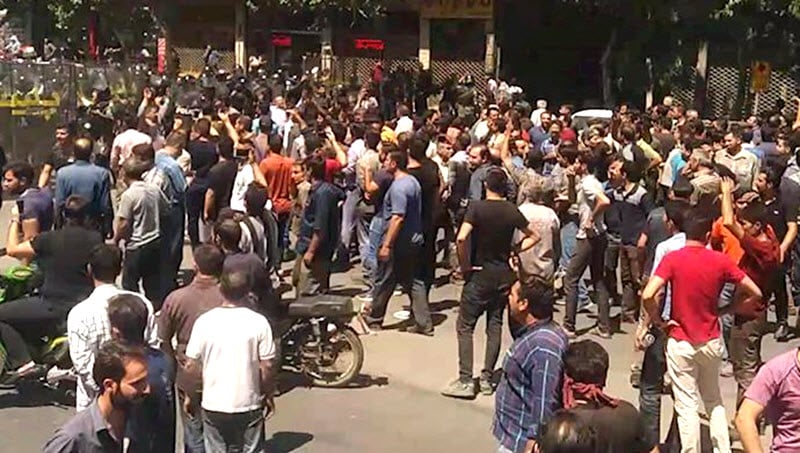 A number of video clips of protesters chanting and marching in New Shapur, Isfahan, on Wednesday that was posted on social media by local residents. This was the same place that anti-regime demonstrators marched the day before.

In one clip, protesters have set tyres on fire to counteract the effects of tear gas and they are chanting: “[Supreme Leader Ayatollah Ali] Khamenei, have some shame. Free the country.” In another, protesters can be heard shouting: “The silence of any Iranian [in response to Iran’s current problems] is a betrayal against the country.” A third clip shows a member of the state security forces trying to stop the people from assembling, but being ignored.

A woman called Sheyda called from southern Isfahan to report that some members of the security forces have been reluctant to confront the protesters. She believes that this may be due to their fears about losing their jobs over a violent crackdown if the Iranian Regime falls.

While a man called Shahab from Rasht in northern Iran reported that he had visited Isfahan during that protests.

He said: “We can solve our problems through the protests. It might take some time, but eventually the protesters can get what they want, and they should not be disappointed [with the reaction of the authorities].”

Elsewhere in Iran, at least 1,000 protesters turned up to an anti-regime rally in Karaj on Tuesday.

One clip and several online images, also verified by VOA Persian, showed security officers walking among the protesters and assaulting them.

These demonstrators were frustrated by the Regime’s handling of Iran’s economic problems. They chanted: “Military force cannot stop us, mullahs get out.”

Iran has seen nationwide protests since December 2017, which range from dozens to thousands of protesters and cover many diverse issues. The centre of their argument, however, is that the Regime must go and the people must rule Iran.