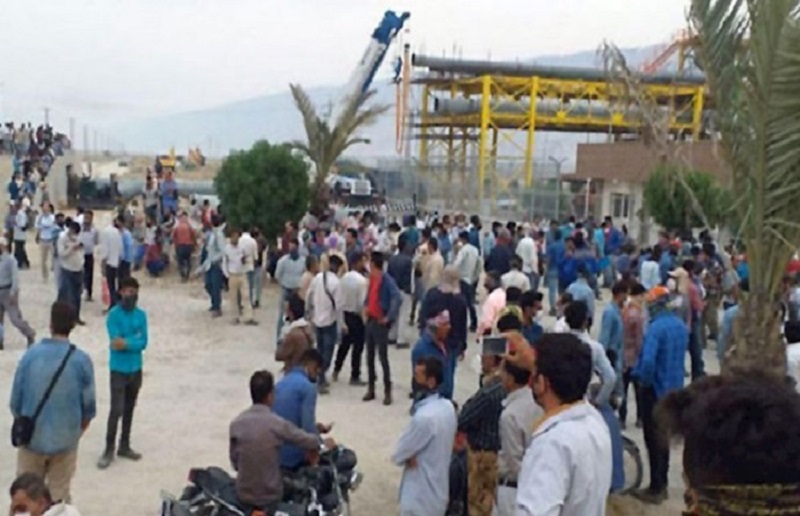 So far, the workers of Abadan, Ahvaz, Mahshahr, Qeshm, Kangan and Lamerd, and Dasht-e-Azadegan oil and gas and petrochemical refineries and the 22nd and 24th phases of South Pars, the workers of South Pars power plant, Parsian gas refinery and several related companies in Assaluyeh have stopped working. They have joined the strike.

The oil and petrochemical industry workers’ strike in several Iranian regions is the first coordinated workers’ protest in recent decades. A very large proportion of the striking workers have a contractual agreement and as a result, have no job security, and their wages are paid with a delay of several months. Wages that are far from the cost of living and the poverty line. The strike linked to oil and petrochemical workers to other contract workers, including in municipalities and railways.

The demands of the strikers

In addition to the harsh conditions – including working in the unbearable heat of 60 degrees – the oil workers have insisted on the realization of their inalienable rights and said they will not stop their strike until they achieve all their demands. They are demanding payment of arrears of wages and benefits and irregular cessation of payments, and they are protesting against a 50 percent reduction in salaries compared to 2017-2018 which is the result of the devaluation of the national currency, the unclear status of personnel contracts and job security, and the non-implementation of the job classification plan and at least they want the return the fired workers.

Unlike the previous facts this time, despite many efforts the regime was not able to stop the strike and prevent its spread and publication in Iran.

The statement of one of the angry workers is showing a clear image from the situation, as he said: “If you arrest us, we will come back and continue our strike.”

Because of the endurance of the workers, the regime was forced to cover the strike in its state media:

“The insistence of the workers of Haft Tappeh Sugarcane Cultivation and Industry Complex to enforce their legal and trade union rights has become a model for the rest of the protesting workers in other production units of Khuzestan and neighboring provinces.

So, that since the beginning of this week, employees of Abadan and Parsian Refineries, Lamerd Petrochemical, South Pars Refinery Phases 22 and 24 and Qeshm Heavy Oil Refinery have also demanded their delayed salaries and benefits to be paid and have announced that until they will continue their strike until their demands are satisfied.”

The importance of the oil workers’ strike

It is clear that due to the one-sided country’s economy and its dependence on the oil industry, the strike of oil workers is very different from the strike of other working branches and is of vital importance to the regime. In addition, most of the country’s industries are dependent on oil. Hence, the regime has continuously tried to prevent protests and strikes in the oil fields by any means possible, including threats, bribes, false promises, and the granting of small and temporary concessions. Therefore, this time the regime tried, but all its plans have failed so far.

Summary of Iran Protests in July 2020