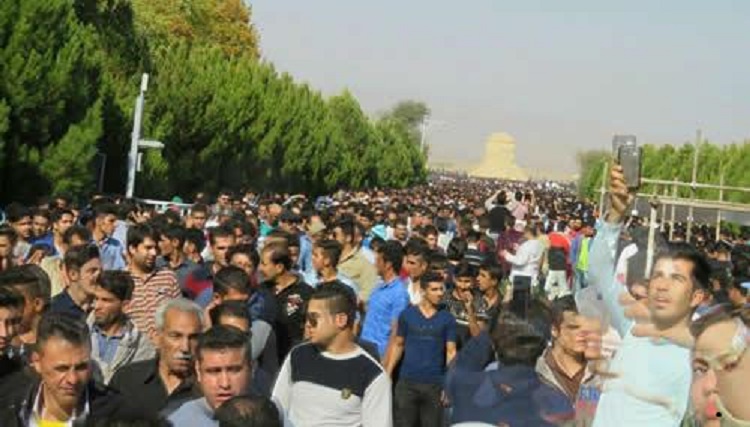 Meanwhile, inside Iran, unrest grows. The last four years of “moderate” or “reformist” Iranian President Hassan Rowhani failed to yield any solutions to the demands raised by the people, despite claiming to hold the “key” to all problems.

In southwest Iran, the city of Ahwaz has been the scene of continuous unrest. Locals are protesting a slate of plans to reroute the Karoon River, a vital source of water for the area. These plans also include diverting water from Karkhe River, and excessive dam construction. The water is to be used by the oil ministry for inexpensive oil extraction methods.

“This practice, mainly implemented by the Revolutionary Guards, has fruited a long list of dried local lakes and ponds,” writes Heshmat Alavi, political and rights activist focusing on Iran, in his article for Al-Arabiya, adding, “The result has been nothing but increasing air pollution and water and power being frequently cut off. To this end, the people’s very health is in danger as clean air to breath is literally hard to find.”

In nearly a dozen Khuzestan Province cities banks, administrative offices, schools and universities have been closed. Oil production has even suffered, with a 770,000-barrel reduction.

What’s quite concerning to the regime are the street protests that began on February 12th and have gone on for at least a week, in spite of  warnings issued by state security. Despite security measures to prevent escalation of the rallies, crowds gathered in Tehran’s Vanak Square, and protesters expressed solidarity with their fellow countrymen and chanted against the regime.

According to Alavi, “While demonstrators were protesting the lack of vital daily services, the atmosphere quickly grew political with the crowd beginning to chant ‘Death to tyranny’, ‘Death to repression’, ‘We the people of Ahvaz will not accept oppression’, ‘Expel incompetent officials’, ‘Ahwaz is our city, clean air is our right,’ and ‘Shame on state police’.”

Iranian opposition leader Maryam Rajavi praised the people of Khuzestan, chiefly Ahvaz, and called on all Iranians for their support of people of Khuzestan, most especially the ill and vulnerable. Rajavi called the regime the source of major and minor dilemmas in Iran, saying, “One cannot expect the mullahs’, the regime’s leaders and officials to provide any solutions.”

Although the province is rich in oil, the locals enjoy few benefits. The city of Ahvaz has a population of nearly one million, and is surrounded by a large number of petrochemical factories, emitting a vast amount of pollutants. Locals face extreme environmental challenges. In fact, the World Health Organization ranked Ahwaz as the world’s most polluted city in 2015.

Activists and locals call the situation “terrible and extremely complex”, and protest that the regime wants only to make money from their lands. The regime’s response to the unrest was issuing a statement warning people to refrain from ‘illegal gatherings’, and that serious action would be taken against any and all violators.

“Riot police units have also been dispatched to Ahwaz, in addition to additional forces from neighboring provinces. Authorities banned many Western reporters from visiting the city, raising even more concerns about the regime’s true intentions,” reports Alavi.

As the regime fails to respond to the people’s demands, it escalates their frustration with much of the country’s budget being allocated to Iran’s involvement in Syria, the regime’s nuclear and ballistic missile program and crackdowns on dissent, as well as human rights violations. Meaning the protests in Ahvaz may be just the beginning, and in the future, more intense rallies in cities across the country will follow.