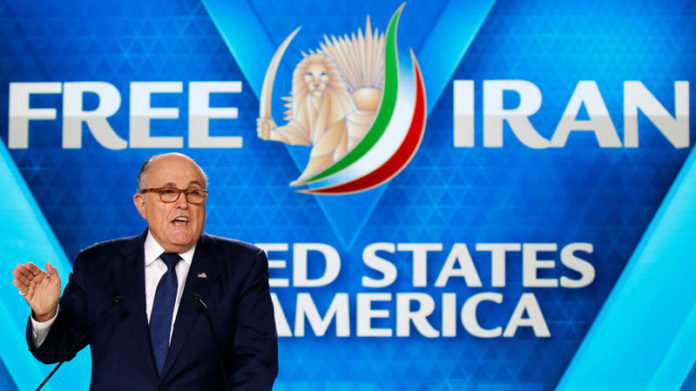 Giuliani, a former New York mayor, suggested to the 100,000-strong crowd that Trump’s moves to reimpose sanctions and get tough on Iran were part of a campaign for regime change.
The Free Iran annual gathering is organised by the National Council of Resistance of Iran (NCRI), a coalition of Iranian dissident groups that seek an end to the Regime and the introduction of democratic government in Iran.

Giuliani later told Reuters: “I can’t speak for the president, but it sure sounds like he doesn’t think there is much of a chance of a change in behaviour unless there is a change in people and philosophy.”

He then pointed to the ongoing protests in Iran as evidence that the sanctions, reintroduced after Trump withdrew from the 2015 nuclear deal in May, are working.
He said: “We are the strongest economy in the world … and if we cut you off then you collapse.”

This is not the first time that Trump’s supporters have expressed their support for the Iranian Resistance or spoken at NCRI events. Giuliani has expressed support many times in the past, while national security adviser John Bolton addressed their main conference last July, promising that the Regime would fall by 2019.

In May, Bolton said that the US policy on Iran was to prevent the Regime from obtaining nuclear weapons.

Giuliani said that sanctions against the Regime, which have already seen many companies pull out of Iran, must be increased and said that Europe, who is currently trying to save the 2015 deal, should be “ashamed” of itself.

He said: “Anybody who thinks the Ayatollahs are honest people is a fool. They are crooks and that’s what Europe is propping up … murderers and sponsors of terrorism. Instead of taking an opportunity to topple them they are now left propping them up.”

The mullahs stole the 1979 Islamic revolution from the people of Iran and ever since the NCRI have been fighting to bring another revolution, which will put the people in power.

Maryam Rajavi, the president of the NCRI and president-elect of Iran for the transitional period, told the conference: “Regime change in Iran is within reach as never before … The wheels of change have started turning.”

Regime change is the wish of the Iranian people, as evidenced by the protests in Iran. 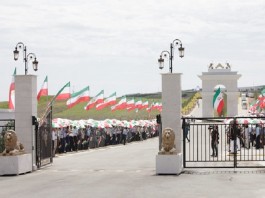 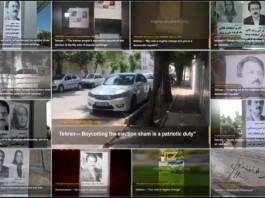 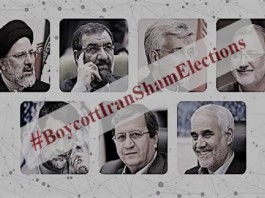